Not just a bang, but a whimper

For some reason, my holiday weekends seem destined to be destroyed. I knew that there was a three day weekend coming up when last Sunday night I started getting sick. This time, it wasn't just the day off that was at stake, but a 10k on Saturday morning. So I laid low allll week. No drinking, no fair, no beach, none of our usual evening activities. Poor Thatdog didn't even get to go to the dogpark. By Friday, I was back to feeling my old self. In honor of the race, Thatmom decided to spend the weekend here with us, so she could cheer me on. She brought down TMD and we were giving the dogs a quick walk before heading out to dinner. I think I heard the "pop" before I got the familiar feeling of nausea in the pit of my stomach. My ankle had just rolled right out from under me. I was able to bear weight on it, which is always a good sign, and we headed back for the ever-familiar "RICE" therapy. (Rest - Ice - Compression - Elevation) RICE did a great job, by the end of the night there was no swelling or redness, but there was no way I was running a 10k the next day. I could bear weight on it, but it was definitely painful. A very mild sprain, but a sprain nonetheless. Dr.Thatmom noted that if this had happened a day or two earlier, I probably would have been fine to run. As I complained to Thatboy about how I would feel better about missing the race if there was SOME outward showing of injury, since there was no swelling, Thatboy pointed out the bruise that ran up my foot from beside my anklebone, up along the tendon line to my calf. Nice.

So instead of getting up at 5AM to run, we slept in and then I fixed up breakfast for the three of us. We headed to the mall for a little retail therapy. Pretty soon it was 4pm, and time to head to the beach. San Diego has a host of fireworks options, and we had decided that we were going to head to La Jolla - but not the La Jolla most of you tourists know. We headed to La Jolla Shores. Better parking, nicer beach, and we'd get to see the fireworks from SeaWorld, La Jolla, and the Fair. La Jolla Shores is much more of a locals beach - most tourists rarely venture past Prospect. 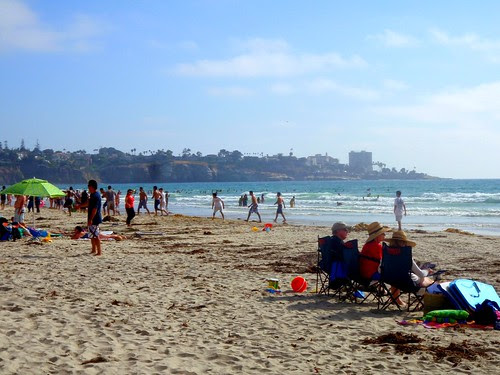 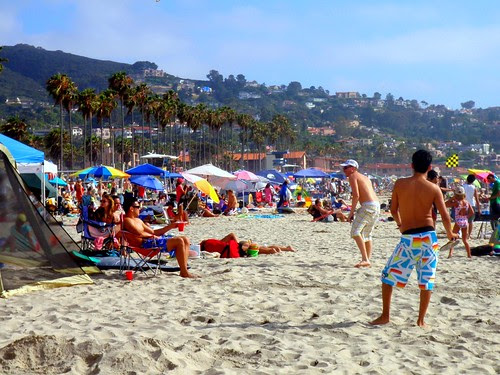 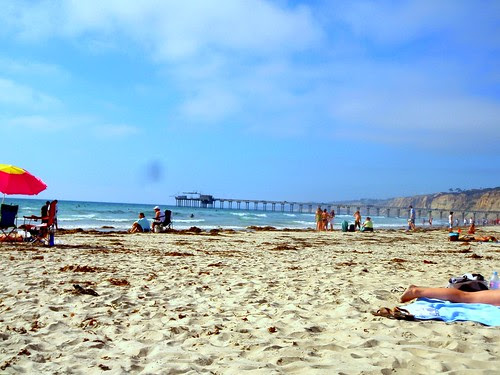 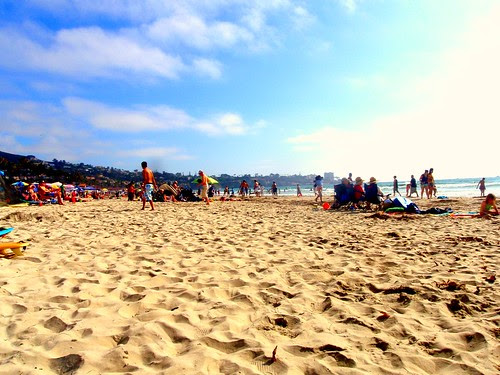 We parked and headed to the Cheese Shop to pick up dinner. Thatboy and I are pretty boring when it comes to beach food. There's nothing either of us likes better than sandwiches on the sand. The Cheese Shop is located just off the beach and is 100 times better than a Subway, Quiznos, or Togos. To start with, there's the candy selection. 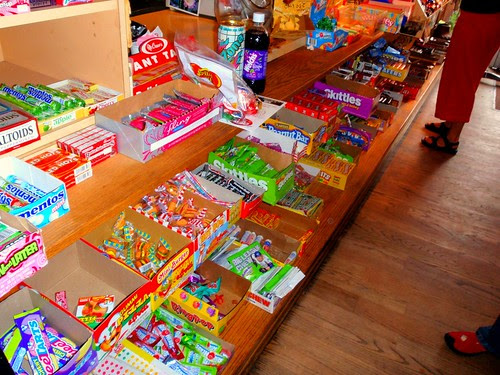 Thatmom was happier than a pig in, well, you know. She kept picking up candy after candy and declaring that it was from her childhood and she loved it so much. We left the store with probably her weight in candy in an inconspicuous brown bag. 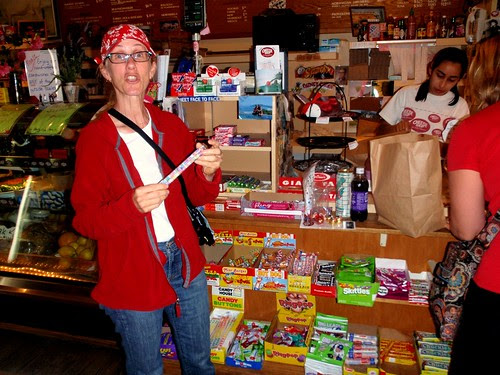 Then of course there's the sandwich selection - fresh meats, cheeses, breads. There's a set menu, but you can change around any aspect of any sandwich. Thatboy got the pork tenderloin on sourdough. I chose the turkey, jack, and avocado on sourdough, and Thatmom had turkey, Jarlsberg and avocado on pumpernickel. 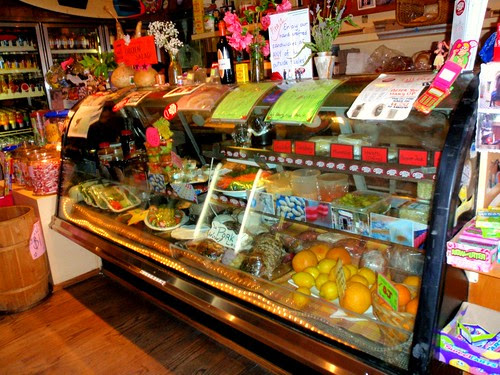 There are also the other fun aspects of the Cheese Shop, including a wall of imports like Cadbury candies, marmite, and other things that you don't usually get to see in a sandwich shop. 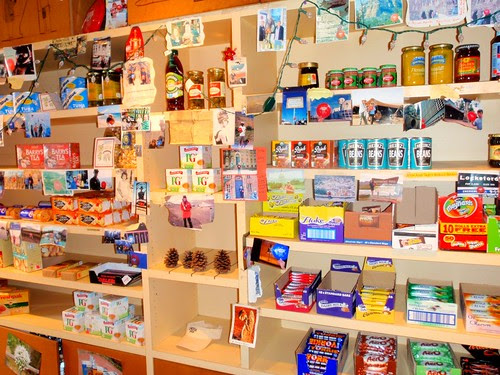 We made our way down to the beach and set up shop. Thatboy couldn't wait to dig into his sandwich. 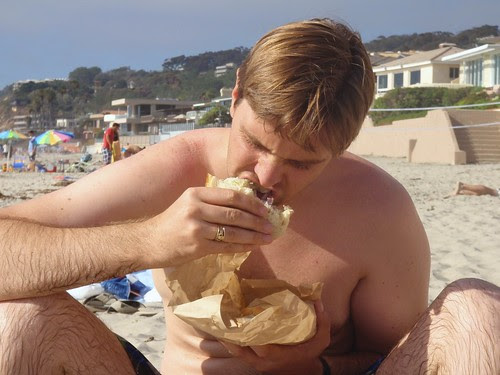 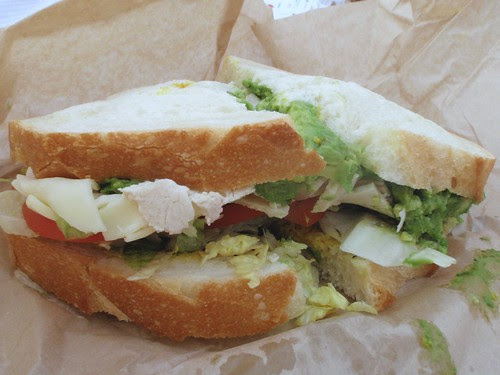 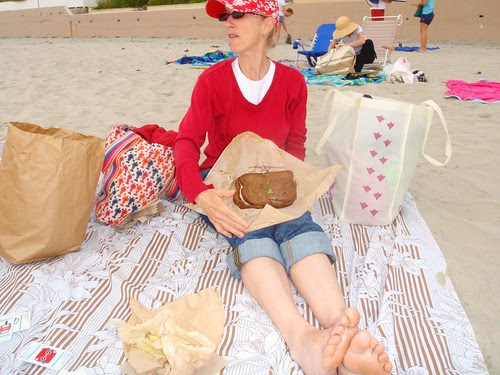 We played a couple games of Mille Bourne before Thatboy suited up and headed into the water to catch a few waves before the fireworks. Thatmom and I stayed on our blanket and read. 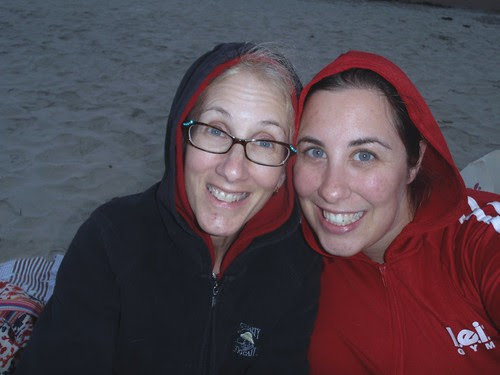 Before we knew it, the sun was setting. 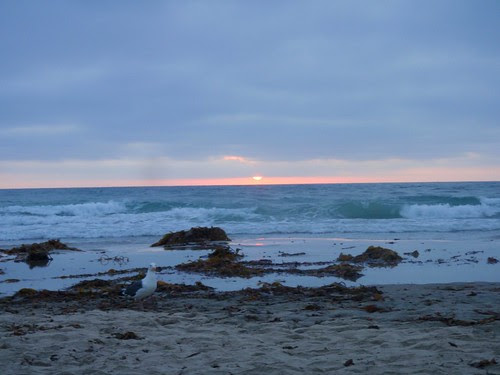 And there was a familiar figure running towards us to warm up before the shows began. 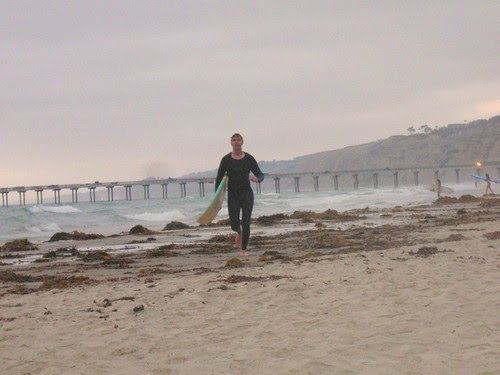 We got to begin with the SeaWorld show, which I used to test out the special "fireworks" setting on my little point and shoot. Yup. I've got a fireworks setting. And a beach setting. And a sunset setting. I knew i wanted to take some fireworks shots ever since seeing Winnie's gorgeous ones. Of course, her shots were taken with a fancy DSLR, with a zoom lens and a tripod while mine are with a little point and shoot, no zoom, and no tripod. 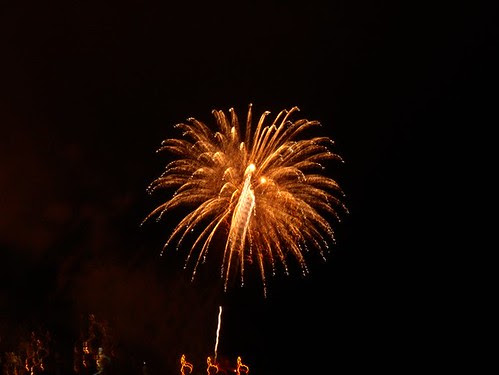 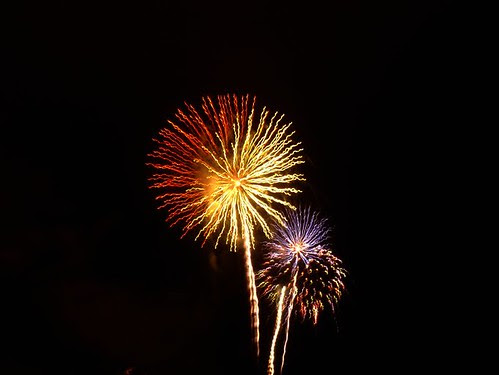 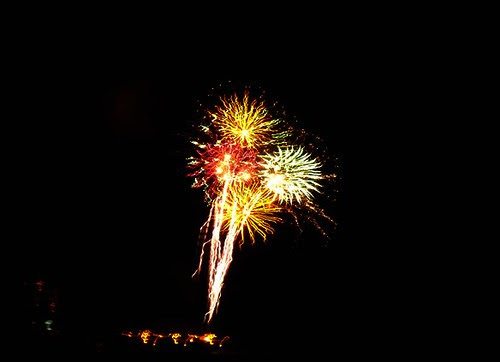 Sunday morning we took Thatmom to Del Mar for breakfast since she had never been there. We decided to give Americana a try since we'd never been there and it's in the heart of the village. Unfortunately, as much as we love Del Mar, we are usually unimpressed with the food there and Americana fit right in with our preconceptions. It wasn't bad food, just nothing impressive. 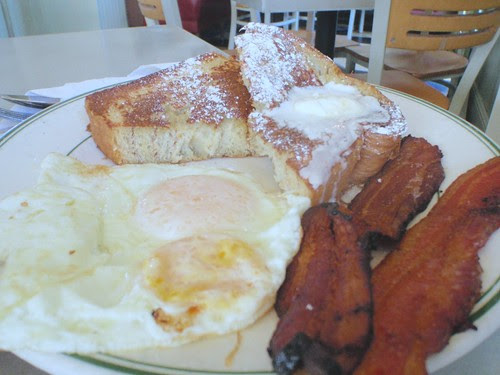 Thatboy ordered Oscar's choice, which usually comes with pancakes, eggs, and bacon. However, Thatboy was dying for some French toast, so he subbed that in, and was a little annoyed by the substitution charge. But it was still cheaper than the $5 side of bacon. 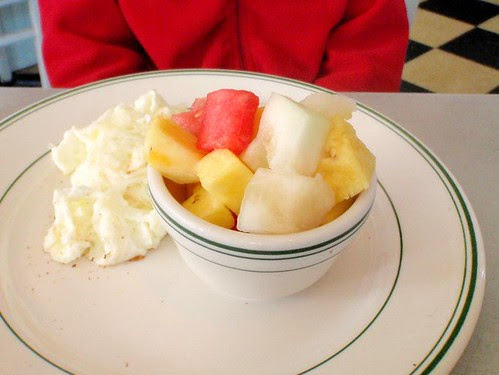 Thatmom ordered eggs, and was also a bit annoyed by the charge for egg whites as well as the charge for fruit instead of potatoes or grits. Not pictured is her "challah" appropriately quoted because it was SO not challah. You'll see in my selection below. 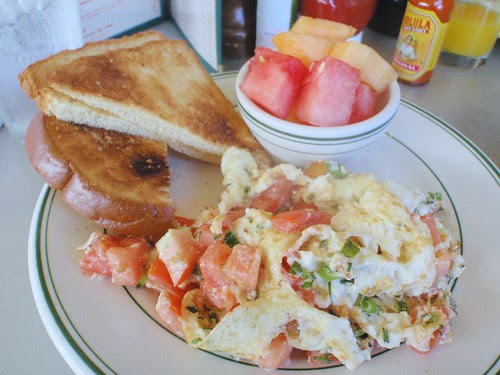 I had the Del Mar Powerhouse - egg whites with tomatoes, green onions, and herbs. You can see my "challah" here. Looks like plain old toast, right? That's pretty much what it tasted like. Cara and I had a discussion a while back when there were a bunch of "challah" recipes floating around the internet, about how non-jews don't really get challah. They pass off any bread made with egg as "challah" when it really lacks most of the best qualities of challah. So my word of advice, if you're going to make challah, get your recipe from someone Jewish, or a recipe that comes from a Jewish baker. Trust me on this one. 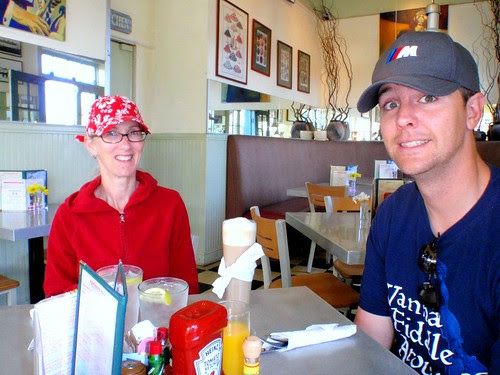 Happy Independence Day from Thatfamily!
Posted by That Girl at 10:50 AM