I got an email from my dad yesterday -

except obviously it wasn't from him. It was a forward from my mom, from his email address, but nevertheless my heart jumped to my throat when I saw it. Realistically I know it can't be from him, yet somehow there is still that feeling of hope that maybe in some miraculously way it is. That I'll open it up and feel his humor and warmth. Thatmom and I joke about what kind of message he would send if he had access to the mail system or email, but in reality neither of us is really sure what he would say if he had the chance. Seeing an email from him is a reminder all over again of how I won't be getting his quick notes checking in on me because he hasn't heard from me for a day or two.

I've been incredibly stressed, anxious, and irritable this week, so I decided this evening would be a good time to pamper myself a little bit. Especially since Thatboy was going surfing with one friend and then out for drinks with another, leaving me the evening to myself. First stop was Bloomies for the Lancome bonus. I picked up some new mascara I was in DESPARATE need of (I swear by the Definicils high definition) and I got all these goodies!: 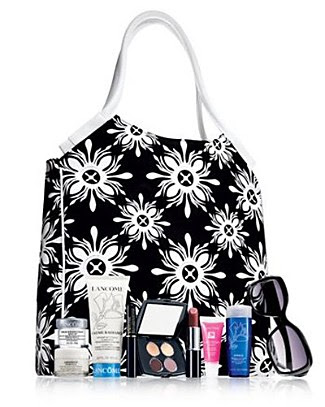 Then it was off to the nail salon for a mani-pedi. The last pedicure I remember getting was in September, and while I'm better about manicures it has still been quite a few weeks and I more than needed it. I went suitably dark and moody on my toes - OPI's Lincoln Park After Dark which I discovered this summer - and am probably the last person on Earth to make that discovery. Thatboy HATES it because it's so dark. I can't be quite as dark on my nails though, so in my typical mutipersonality way I stuck with a nice neutral - Essie's Limo-scene. I love it because it looks white in the bottle, but on my nails it's a nice pale pink that looks just a little cleaner than natural.

I got home JUST in time for Top Model and since I obviously can't be distracted from that I needed something quick for dinner. I had found a package of Lipton Spanish Rice in the pantry the other day when I was fishing around for tomato paste - I have no idea how long that's been there, but it sounded just perfect for tonight. I added some garlic, tomatoes, onion, bell pepper and smoked turkey sausage and set it to simmer while the show started. By the time they started blurring out the pieces of models that were not covered by the itsy bitsy teeny weeny bikinis, dinner was served! Have I told any of you lately how much I LOVE turkey sausage? I cut it up and throw it in our lunches, toss it into pasta, with rice - it's my favorite precooked meat. AND you will all be very pleased to hear I refrained from overspicing this time - I don't think my digestive system is loving me right now. Either that or it could be the swine flu.........

Fun Legal Fact of the day: If you give a man money to buy a house for the two of you because he says he's going to marry you and he turns out to already be married and refuses to give you your money back you CAN bring a lawsuit against him.
Posted by That Girl at 8:13 PM