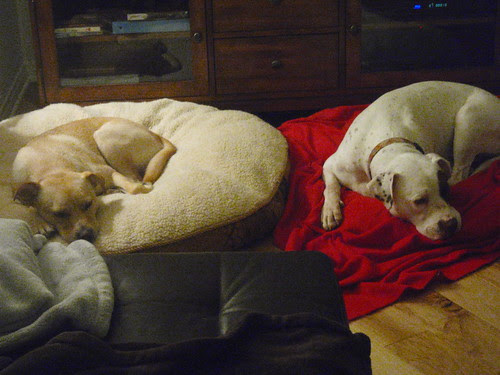 What's cute about this picture? Thatdog is on TMD's bed, and TMD is on Thatdog's bed. Sharing's nice.

On Friday morning I snuggled into the car seat as Thatboy drove us to work, thinking how nice it was going to be to take a little nap on the way up to Thatmom's house that evening. Then I remembered - I was going to be driving - grrrr. Thatboy had a hearing on Monday morning so we were taking two cars up and I was going to get to come home myself on Sunday night. It was no consolation that I got to have Thatdog as my companion. He's not very good company in the car - spending most of the time sleeping. The only thing that makes it a bit better is that he manages to contort himself into the strangest, most uncomfortable looking positions. Next time I drive up with him I'm going to try to snap a picture.

Saturday we had discussed going up to the LA Festival of books. It's something Thatmom has enjoyed going to in the past, but that was back when she had a faculty parking permit making parking a breeze. She was having mixed feelings about going, since it was something she always did with Thatdad. Then she started having sympathy pains in her back. Thatmom and I are so connected that whatever ails me, also ails her. So we decided to skip out on the festival so we could run errands and go see a movie. We saw Sunshine Cleaning which was so much better than I'd heard. The reviews compared it to Little Miss Sunshine and were disappointed in the movie. As for me, I wasn't a huge fan of Little Miss Sunshine to begin with and going in with low expectations definitely helped. Amy Adams and Emily Blunt were adorable and dysfunctional and the little boy who played Adams' son was adorable. Thatmom remarked that he looked like Thatdog in human form. We came home and I got to work at making dinner - grilled shrimp fajitas. After dinner Thatbrother and UDubb went back to work and we settled in to watch Grey Gardens. What an interesting story. Thatmom is beyond fascinated and has already added the documentary to her blockbuster que. She also believes Drew Barrymore deserves an Oscar for her performance. We spent the rest of the weekend making references to the movie and the bizarre relationship between Edith and Edie Beale.

Sunday we all got together for breakfast - I am becoming well adept at cooking for 5. Then I went for a run again. It's been a while since I could run because of my back, but I get so antsy when I don't. If you run, you'll understand how good it feels your first day back. I ran for over 7 miles which is the longest run I've done in a while. In general I run 3 miles a day, 5 days a week, but the first day back, I always feel like I could run forever. Thatboy got me a cute pink waterbelt for Valentine's Day and I hadn't had the opportunity to test it out yet. The rest of the day was more "around the house" chores until it was time to get dinner ready. It was a request from Thatmom, her favorite of my recent cooking - grilled chicken with avocado salsa and honeyed corn bread. Then it was back in the car with Thatdog and on the road.

This morning I went back to my 3 miles. I brought my usual running partner with me - Thatdog. I had left him out Sunday because I didn't want the extra strain on my back. This morning I realized that as much as I love the company, sometimes it's nice to run without him. Especially when he gets into one of his moods. This morning as we approached the trail behind my place where we run I noticed a power walker. The man was older, stoop shouldered and moving his arms and hips back and forth as he heel-toed it. Thatdog wasn't quite sure what to make of it, and since Thatboy takes on a similar position when he's playing "creepy scary chasey guy" around our place I think it spooked Thatdog. He began barking at this man like he was going to eat him - my sweet little dog! I knew he wouldn't do anything to the man, but the man didn't know that and he hightailed it in the other direction. How embarrassing!

The rest of the day was pretty uneventful - I only had one tearful moment in my office which is a vast improvement over this weekend. By the end of the day my legs were feeling all 10 miles over the past two days and so Thatboy ran me a bath to soak. We've been doing a ton of "accidently on purpose" spicy food lately and tonight was no different. Last week I accidently over red-pepper flaked our chili, and tonight I realized I had bought the extreme spicy version of enchilada sauce. Good thing we like spice. Thatboy said these enchiladas are the best I've ever made. But oh so messy! 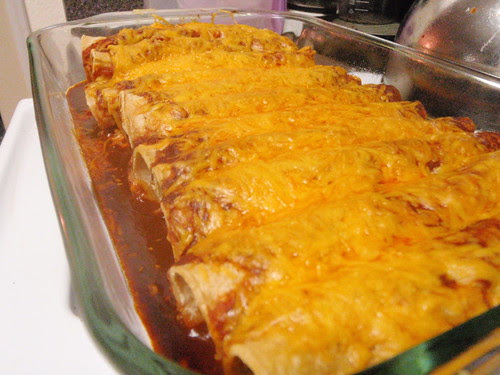