Last night I dreamt of pirates and cupcakes...

But not Somalia pirates...my pirates include the kind played by Robert DeNiro in Stardust. In fact it was Robert DeNiro...except his name was Angie. And if you haven't seen that movie yet - you're missing out. It makes me very happy. I like fairy tales. Princess Bride is one of my favorite movies and this is along the same lines.

Even with dreams of pirates and cupcakes my day started out VERY hectic. Today was a carpool day. Thatboy and I are so green that days where he doesn't go surfing after work we carpool. And today we had a date planned which means a free ride to work for me! But it also means I have to get my butt in gear in the mornings because Thatboy leaves for work earlier than I do.

Tuesdays are also our museum days. On Tuesdays we meet for lunch at Balboa Park and go to a museum. I love Balboa Park. Sometimes we meet for lunch there and just walk around the trails and gardens, but Tuesdays are culture days. Today we headed to the San Diego Automotive museum. I forgot my camera at home, so I'll just paint you a picture. The museum has some really cool cars. You don't realize how big cars used to be back in the "early days" of automotives. And the early cars were all convertibles. I was definitely born in the wrong era. In the back are motorcyles - the early ones were much more similar to bikes than cars. And right now there's a hot rod exhibit - there is no way you could ever get me in one of those things. I wouldn't even drive Thatmom's mini without sending up multiple prayers for my well being. At one point in time Thatboy got really excited.

TB: Now THIS is a sexy car.
TG: Really? What makes it so sexy? Just because it's a convertible jag? Does it look like something Bond would drive?
TB: No! Look at it! Look at the lines, the curves - it looks like the lower half of a woman's body.

And then I saw it. And my mouth dropped open. And I laughed SO hard that the woman beside me started laughing and I'm not even sure she heard Thatboy and I pray her small children didn't hear him. Do you see it? Fear not if you don't, it just means you don't have the mind of a thirteen year old boy.

For our dinner tonight Thatboy and I headed to our favorite local Italian restaurant. On Tuesdays and Thursdays they do half price bottles of wine....and a bottle of wine goes a looooong way with me. (Apparently it goes a long way with Thatboy too since he just told me I spelled dreamt wrong...I'm missing the p......yup, he thinks it's spelled dreampt.....and he keeps insisting I check the dictionary)

Tonight we went with a Super Toscana which is a chianti like wine, but MUCH smoother than chianti. Thatboy likes the finish - after you're done with your sip it's not done with you. It's a very full bodied red. 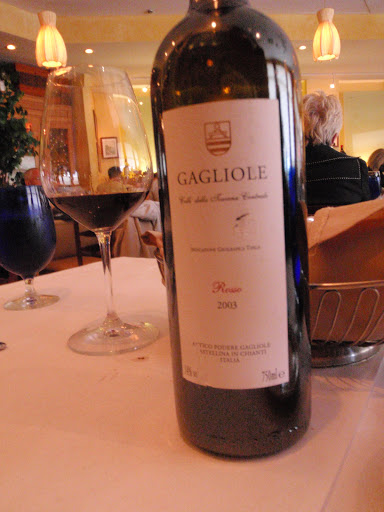 I'm SO boring when I go to my favorite restaurants. I always get the same thing once I find my favorite. Here it's the gnocchi. Sometimes it's light and fluffy, sometimes it's dense (like a matzah ball according to Thatboy), but it's always good. 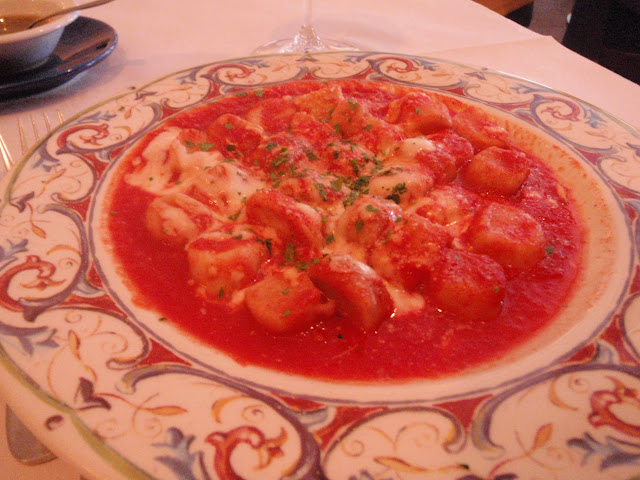 Thatboy is more adventurous. Tonight he had the penne with peas and pancetta. He was more than pleased informing me he had made a good choice. I had a bite (you can't blame me right?) and it was good and salty and cheesey - two of my favorite food qualities. 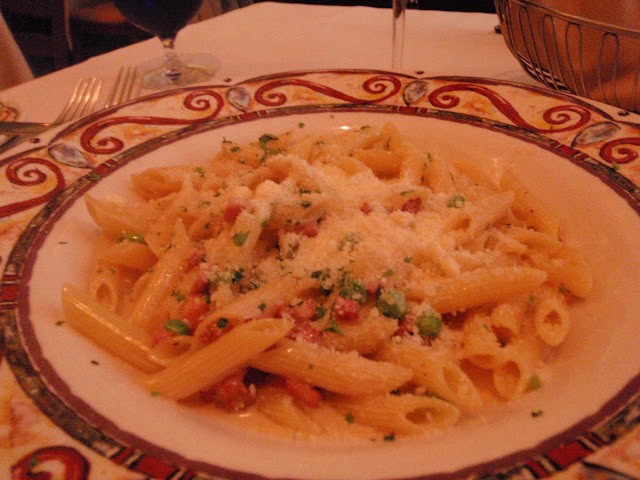 Afterwards we grabbed some sushi from the fantastic sushi place next door for lunch tomorrow. It's half off in the evenings which means delicious and cheap!

By the way, I learned today that San Diego is one of the top 11 best-hair cities in the country - so I really have no excuse for having no control over this mop on top of my head.
Posted by That Girl at 9:45 PM