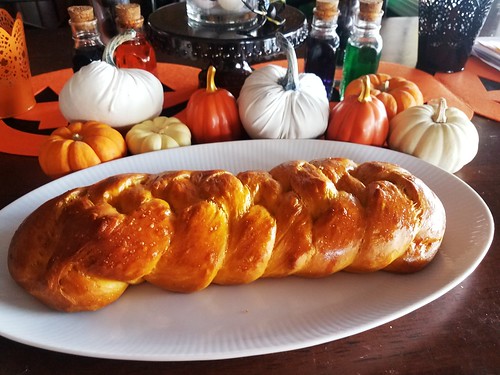 You knew there was no way we were getting through October without mention of pumpkins, right?   I'm not sure you can even call it autumn if you're not putting pumpkins everywhere in everything.

After bad experiences with rotting pumpkins, or falling apart jack o lanterns, we held off on our pumpkin adventures until the end of the month.

First stop was the pumpkin patch! 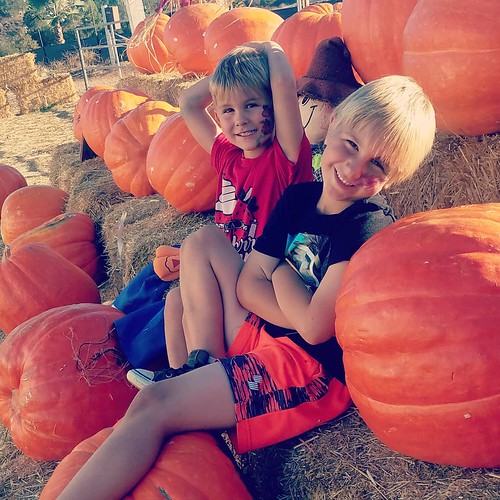 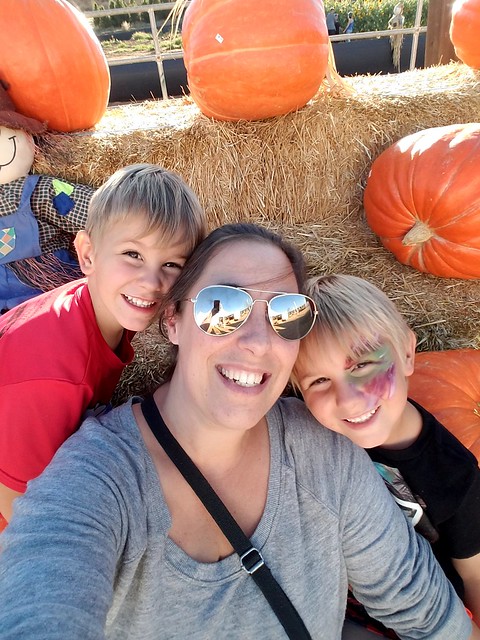 It was an excellent year for pumpkins based on the amount of great ones we found out in the field.  Almost everyone's pumpkin came from their this year, instead of the pre-harvested variety that are placed in lines according to their size. 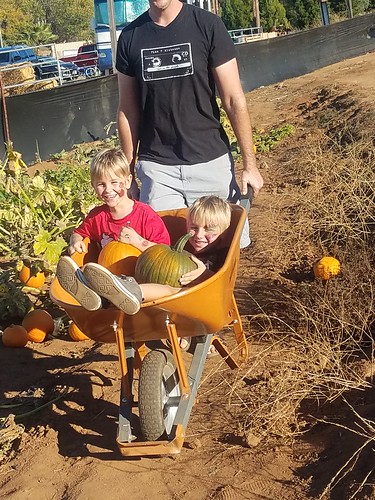 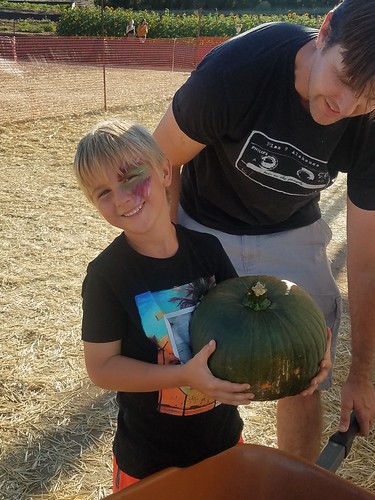 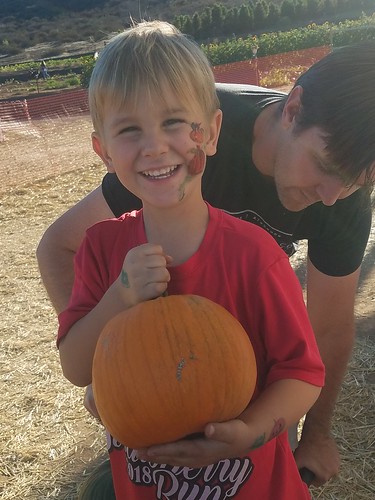 Once everyone had their pumpkins picked out we went exploring.  Like getting ourselves lost in the corn maze. 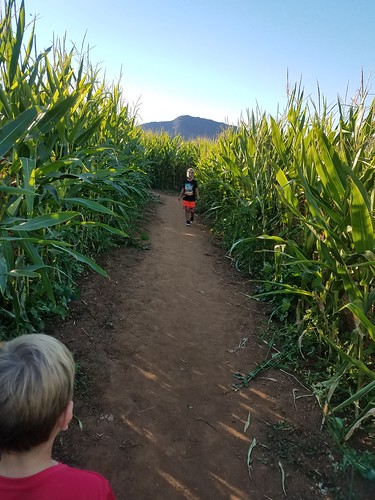 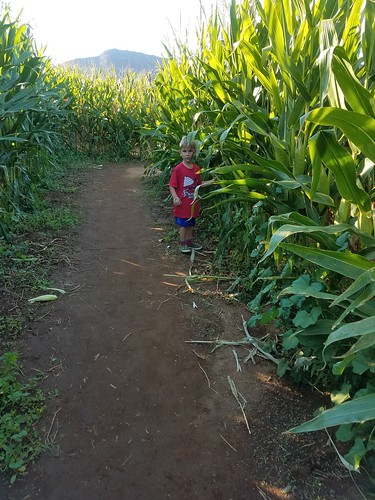 And hopping aboard the hayride. 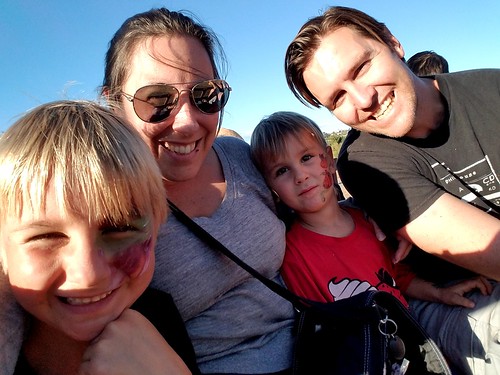 We waited another week to actually carve the pumpkins so they'd be bright and shiny for Halloween night.  Thatboy and I decided to do split duty and carve our pumpkins at a later time so we could help the boys. 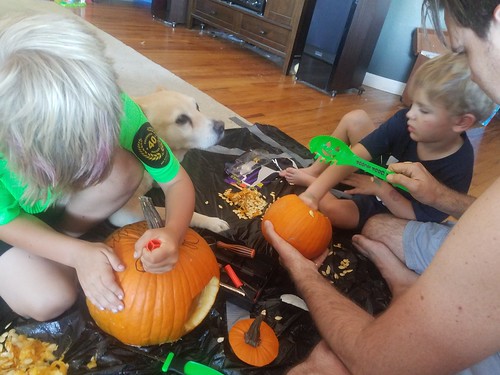 Thatkid is finally at the age where he can do a majority of the carving himself. 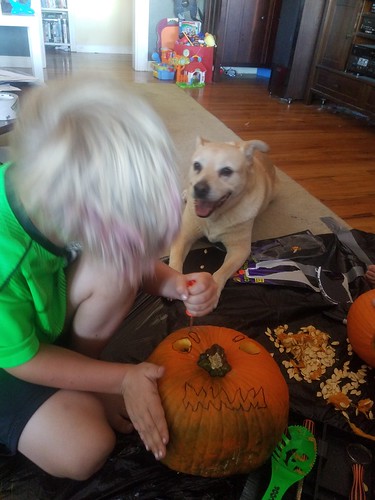 Thatbaby is at the age where he wants to do all his carving himself, but really shouldn't.  And can't. 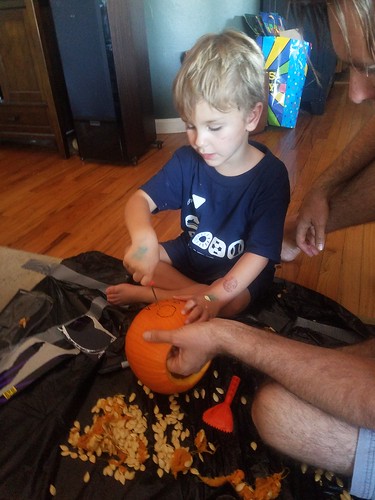 Thatkid put a lot of thought into his pumpkin, specifically looking for one with a flat side that it could rest on, so he could carve a face and use the vine as a nose. 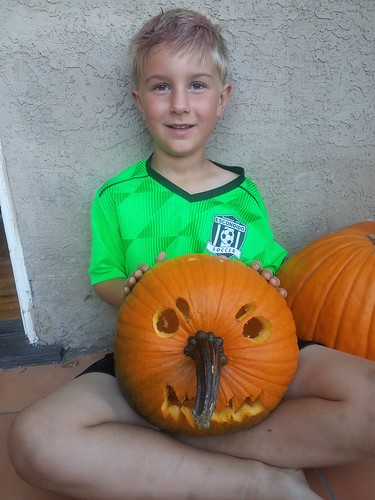 Thatbaby, who wants to do everything his brother does, also wanted a face with "angry eyebrows." 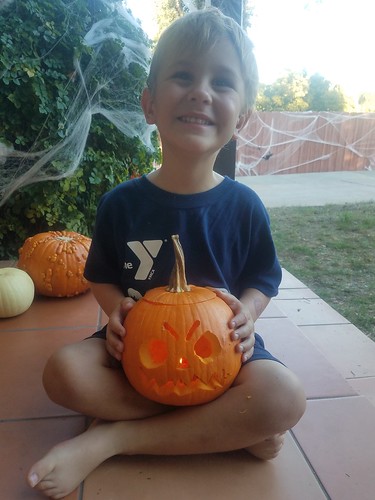 With that little practice session under our belt, we headed back to annual tradition of Plan 9's pumpkin carving contest.

As usual, it's a real family affair.  Thatkid thinks up and picks the design.  He won't touch the inside of a pumpkin, but that's where Thatbaby shines. 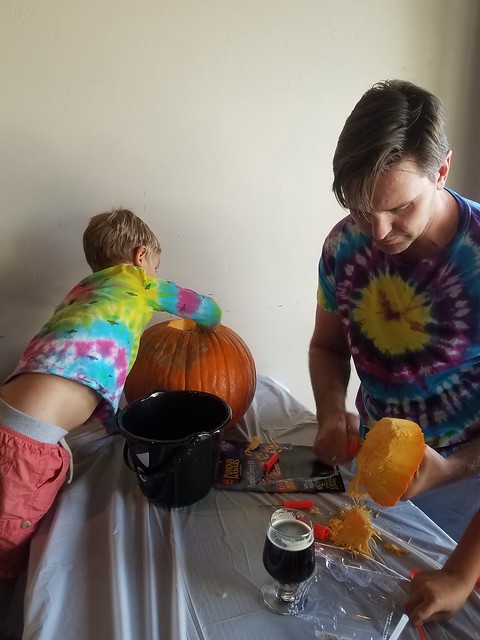 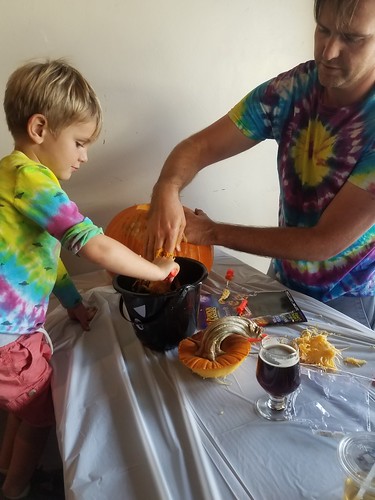 Thatboy's role is the actual carving.  Which takes a lot out of him.

But at the end of the night, all the pumpkins get put up to ooohhh, awwwww, and vote on.  It's really neat to see the creativity. 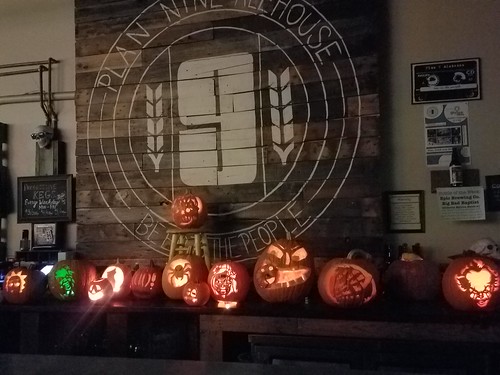 And this year we walked away with second place!  Which Thatkid thought was fair since we got first place last year, someone else should get a chance. 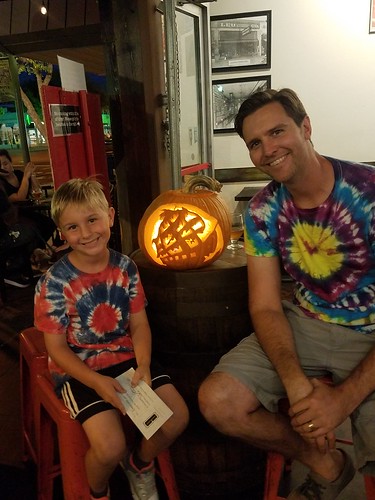 The next night, after the kids went to bed, Thatboy and I did our carving.  Looks like we're all ready for tonight! 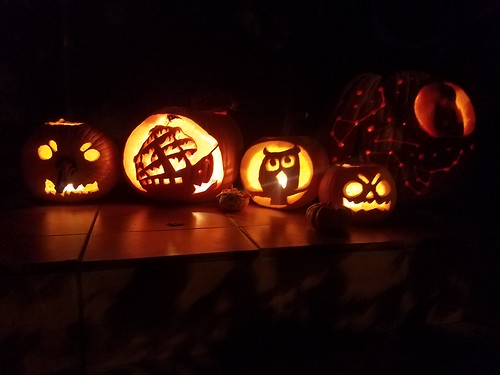 As for pumpkin eating, well, there's a whole lot of that going on.  The kids are eating pumpkin oatmeal or pumpkin cereal.  If there's not a pumpkin bread in the fridge, there's pumpkin muffins.  Or vice versa.  But those recipes are old hat.  They're everywhere.  Everyone and their mom has a pumpkin bread or muffin recipe.  You know what isn't everywhere?  Pumpkin challah.  I've been making challah every other week since the Jewish holidays and when I saw the book contained a pumpkin challah recipe, I knew this was the perfect time of year to try it out.

It is the absolute perfect blend of pumpkin and challah.  It still has that sweet, doughy challah taste and crumb, but with the addition of a pumpkin richness.  The pumpkin flavor itself is not overwhelming, which I credit to the fact that it doesn't contain a lot of the typical pumpkin accompaniments like cinnamon or nutmeg.  Instead, cardamom and ginger help to balance out the flavors which really makes it a fabulous fall bread. 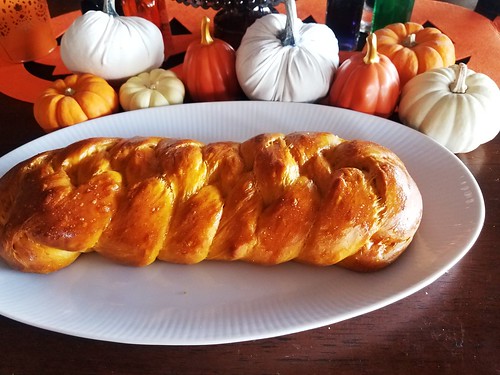