Happy New Year!  I'm so excited for 2017.  We're trying to start it off right, including spending the weekend cleaning the entire house.
Do you know how much fun it is to get a 5 year old to clean his room?  Let me put it this way, at 3pm when he was claiming to be finished, I noticed that the cleanlieness of his room was inversely proportionate to the amount of stuff shoved into his closet.

After we "recleaned" I realized that although I began sharing his room transformation, I never shared the completed project.

The "Before" picture.  When Thatkid was still an only child and sleeping in a crib that had been converted into a toddler bed. 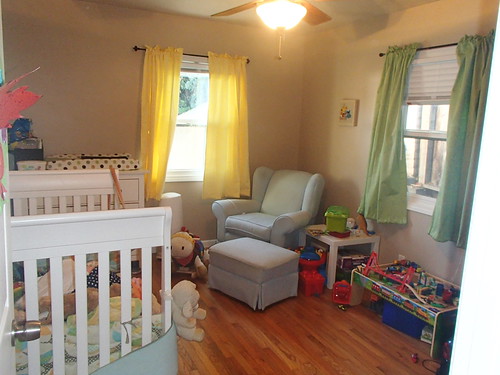 Despite the fact he was no longer in diapers, the changing table still had a home atop his dresser.  The windows were hung with mismatched curtains that he picked out when we moved in. 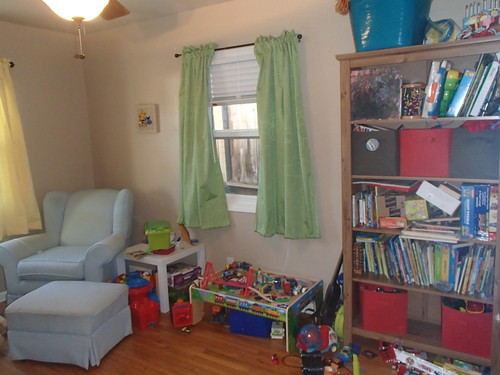 The first step was picking out a new room color.  Which we let Thatkid do.  After all, it was his room.  Whenever we moved to a new house when I was a kid, we always got to pick our own room color.

The color he picked? Behr Curry powder.  Or as we called it, "baby poop." 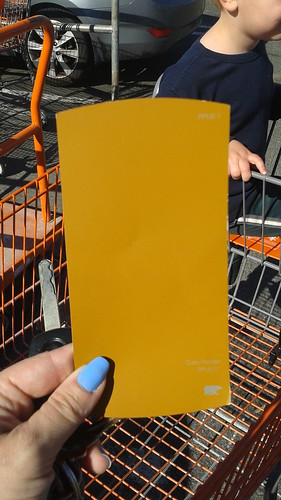 As much as I'd like to say I'm the cool mom who let her kid design his own room, I'm not and I didn't.  Once he picked the color, I did everything I could to keep the room from looking like an assortment of bodily fluids.  I pushed him toward decorating in blues and whites, which I felt would work well with the paint color he chose. 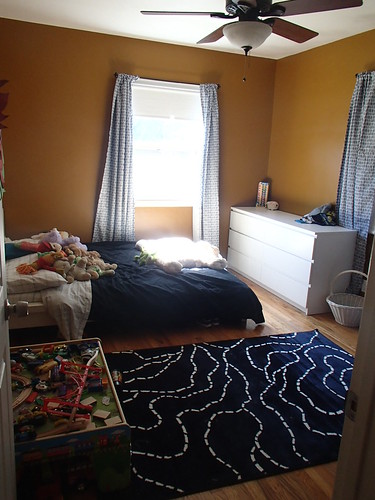 He got a big boy bed, and big boy dresser, both in white, as we moved his old bed and dresser (and glider) into the nursery.  Blackout shades and floor length curtains were hung in the hopes that he'd sleep later.  Which was unsuccessful.  Although originally I had hoped for some kind of fun rug to brighten the place up a bit, this one seemed to fit the decor and had a almost "road" like feel.  Good for car racing. 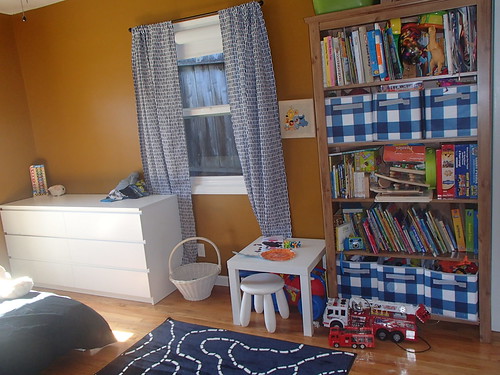 The giant bookshelf remained, still filled with books, but the old fabric shelves were traded out for new ones.

We picked up a table and stools for doing art and playing games, although in truth, most of that happens on the dining room table.

It's very much not a baby room anymore.  It also looks a little different than in these pictures.  In the first place, it's not this clean.  But we've also hung a bunch of Thatdad's Batman cells on the walls.  Which I think makes the room more kid-like.