Sunday Runday: Avenue of the Giants Half Marathon

Do you have a bucket list for races?  I do.  And pretty high up on that list is The Avenue of the Giants Half Marathon.  A race through the redwoods of Northern California.  Billed as one of the most beautiful races in the country, of course I wanted to run it!

Thatboy loved the idea of the race, especially because there isn't a lot of actual lodging around the race, but there is camping!  And he loves camping.  So this year for Channukah he got me entry to the race.  Because what I really wanted to do was camp and run a race with an infant.  But far be it for me to turn down a race entry, so we headed up last week, making a whole vacation out of it.

I was equally parts nervous and giddy about the whole thing.  On Saturday we went to packet pick up. 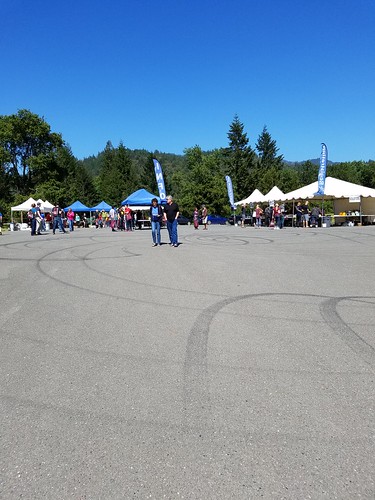 I picked up my bib, and my "swag."  Thatboy had went ahead and ordered me a special tech tee when he got my registration.  I also decided to get myself a new tech hat as a souvenir. 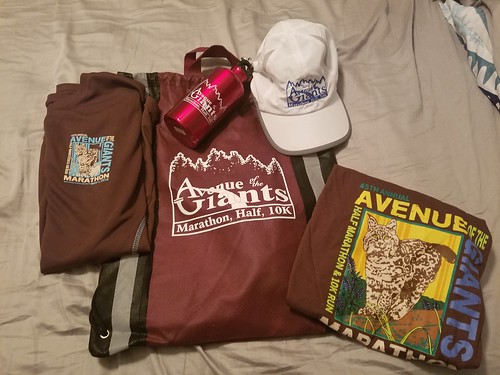 Sunday morning Thatboy was worried about getting there on time.  The campsite exit closed at 7:30am, and The Avenue, which is the only road between the race and the campsite closed too.  There was only one exit/road to the parking lot for the race, which backed up.  So we left the campsite around 6:30 and made it to the parking lot super early.   No worries!  I brought breakfast! 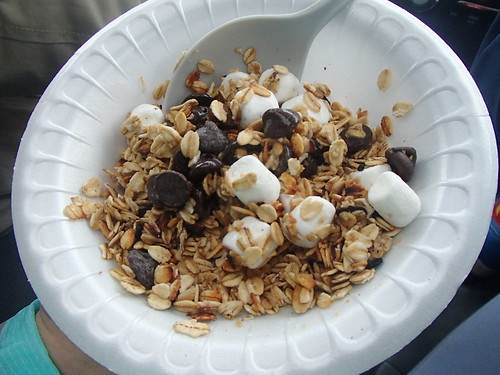 We stayed warm in the car until about 30 minutes before the start of the race, and then I headed to the porta-potties.  And stayed in those lines until RIGHT before the race started.  I got to the start line right before the countdown, and then WE WERE OFF!

A band played us off as we crossed the famous Dyerville Overpass.

And then we entered the trees.

The race had a "no headphones" policy and I decided to run the whole race "naked."  Metaphorically of course.  No music, no water belt.

The first two miles were a little hard for me to get into.  Too quiet.  I tried to take in my surroundings, and they were extremely beautiful, but I needed a little distraction to get into my groove. 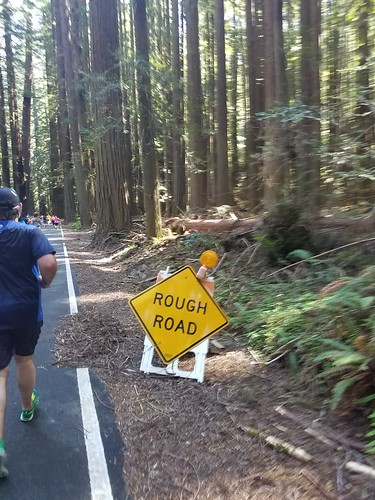 Around mile 2, the woman running next to me turned to ask me if this was my first half marathon.  It was hers.  We started chatting a little, which got me right over the hump.  We ran together for the next two miles.

At the water station just past 4 miles she dropped back, but by then I was well into my groove.  I was in familiar territory since we had just run past my campground.  And there were only a couple more miles until the turnaround.

Once we turned around, I gave myself little milestones to look forward to - half a mile to 10k left! 2 miles to the campground!  1 mile to a 5k! 1 mile to Weott!  1 mile until the overpass and then you're DONE!

I also used this time to check in with my body.  Yep, I spoke (internally) to my hips, knees, and back, making sure they stayed strong for the remainder of the race.

The course itself wasn't too challenging.  It wasn't exactly flat, but the inclines and declines were mild.  There was only one "tricky" part, which was an exposed hill.  I knew once I got passed that I was home free.

And then I was done!  I collected my medal and hung out on the grass with my boys.  No PRs, but I cut 10 minutes off my time since my last half marathon.  I'm on my way back!

We couldn't get back into the campground until 2:45pm, so after we were done hanging out at the finish, we went back to the "parking lot" which was another River Bar.  Many of the runners decided to give themselves an ice bath in the river.  While I had no intention of joining them, Thatboy and Thatkid did.  Thatbaby and I watched them from the safety of the shore.

We ate lunch, then Thatbaby and I took a nap.

One last picture and then we headed back to the campground.

We ate foil packet chicken with white beans and corn, and foil packet vegetables for dinner. 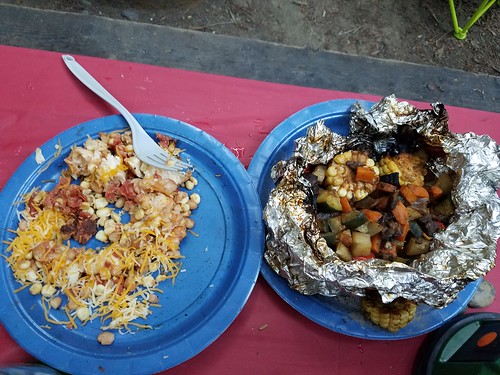 Then we gathered around the fire for smores and hot chocolate before heading to bed for our last night in the woods.
Posted by That Girl at 1:00 AM