In a little over a week, I will have breastfed for a full year.  For me, that's a pretty big deal.

I always knew I wanted to try to breastfeed.  And sure, there are a host of fabulous health benefits for both mother and baby (immunity, allergies, decrease in cancer and heart disease, healthier weight for mom and baby...) as well as being free.  But for me, it really came down to the fact that I have always hated my breasts.  I developed early and with great...generosity.  And lugging these babies around hasn't ever been a dream.  But, if breastfeeding worked for me, then it would be all worth it.  After all, that is what they're there for.  Mammaries.  The things that separate us from birds and fish.

I contribute my success with breastfeeding to two things - luck and knowledge.

And the class itself helped to arm me and really prepare me for what to expect.  It covered so many myths associated with breastfeeding, so I felt fairly knowledgeable, even without any experience.  Pretty much all the misconceptions involved supply in some way, shape or form.  99% of women who claim they have supply issues actually don't.  They just don't realize that you don't need much at first!  And then they go and do something to mess it up.

Milk coming in: Milk can take a looong time to come in.  Up to 2 weeks!  So I wasn't concerned at all when my milk didn't come in before I left the hospital.  Or the day after.  Or the day after that.  I knew it would come, and until then, the colostrum the body produces is the perfect amount and nutrition the baby needs.

How much you produce:  I'm on a breastfeeding forum and I can't even count the number of women who claim they can only get an ounce or two out at first.  An ounce or two?  You child probably isn't eating an ounce or two for at least a month!  At birth, a baby's stomach is the size of a marble, and even though it will eventually increase, it only increases up to the size of their fist.  Have you seen a baby's fist?  Not very big.  It takes hardly anything to fill it up.  In fact, a breastfed baby never needs more than 4oz of milk.  The nutritional content changes so that 4oz contains everything they need.

The Diapers: The class taught me that the best way to determine if your supply is adequate is by keeping track of diapers.  Plenty of wet and poopy diapers?  Your kid is getting plenty to eat.

Keeping it flowing: The class went over a lot of "bad advice" women get.  Like when they feel their supply is inadequate and they're told to pump to increase supply.  Which is basically the opposite of what you want to do.  Because babies are much more efficient than the pump, so the baby is going to help build your supply in a way the pump will never be able to do.  Especially during growth spurts, where if you're pumping you're not going to find it difficult to keep up.  So basically, the answer to supply insecurity is "nurse more."  Or women who are told to supplement with formula very early on- (disclaimer:  There are definitely women who need to supplement for a variety of reasons, but if you work with a lactation consultant, there are ways to supplement that won't jeopardize the breastfeeding relationship.)

At birth: Thatbaby was born with his cord wrapped around his neck multiple times and labor was causing his heart to decelerate.  As soon as he was born, he was whisked across the room to be suctioned, warmed, and monitored, so we didn't do skin to skin immediately, although it only felt like moments before he was placed on my chest.  Babies are supposed to instinctual find the breast on their own, but my guy was a little tired and traumatized.  (Who am I kidding, this kid was a lazy nurser from the start!)  The nurse gave him 30-40 minutes to find the breast, (because really, babies don't need to eat right away, they're pretty full when they get out) and then helped guide him over and latch.

He had a great latch from the start (luck), so I never had to worry about sore, cracked nipples, or even pain - although I was expecting all of the above.  But as I mentioned, was a lazy nurser, so he wasn't so good at sucking at first.  He'd latch and then look up at me like "now what?"  He was a little jaundiced, but a pooping machine, so the nurses had no problem sending us home to work it out on our own.

The first week: As I said before, it took a couple of days for my milk to come in.  And we had some concerns related to that.  First, there was the jaundice.  Then, there was the weight gain - Thatbaby had lost almost 10% of his birthweight at the hospital and we obviously wanted him to gain that back.  Last, were the uric acid crystals we were finding in his diaper due to dehydration.  Because colustrum is fabulous for nutrition, but it's dense, not really liquidy.  So we were also lucky that I have a very breastfeeding friendly pediatrician who didn't fret, but told me that everything would be fine once my milk came in.  And he was right!

And boy oh boy did my milk come in.  So much so, that the breast tissue under my arms filled with milk.  Talk about uncomfortable.  That was the only pain I had while breastfeeding.  Hot showers, massages, hot compresses.  It took almost a full day to get the milk out of there and into my breasts where it belonged.

The second week: Remember that lazy nurser?  It continued into his second week of life.  When it would take me a full hour to wake him up to eat.  I tried everything to get him to wake up so he could eat and return to birth weight. Cold towels, tickling feet, flicking ears, stripping down.  It was exhausting trying to wake him!  This behavior ended the very night we were told we didn't have to wake him again because he returned to his birth weight.

The third week: The growth spurt!  My OB's nurse told me allll about cluster feeding, but it's still frustrating to feel like you just finished feeding the baby, and all of a sudden the baby is crying to be fed again.  I think this is where many women start questioning their supply, not realizing that this is perfectly normal behavior and this is where your supply really starts establishing.  We introduced a pacifier this week, holding off until I was confident in our breastfeeding relationship.

The fourth week:  I started pumping.  After the 3 week growth spurt, I added a pump session after the first morning feed, when most women make the most milk.  At first I barely got an ounce, but with consistency, that built up so that I was able to introduce a bottle week 5. 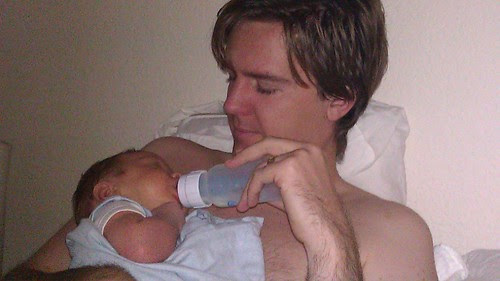 The fifth week:  Introducing the bottle.  Our breastfeeding class gave us so much good information on this.  Things like - it should take the baby as long to eat from the bottle as the breast, give the bottle cold (don't heat it up), feed the baby the bottle while the baby is sitting up, keeping the bottle almost horizontal (like a breast), and most importantly, have someone offer the bottle when mom isn't around, because babies can smell their mother/milk.  So I went for a quick 30 minute run, leaving Thatboy to feed Thatbaby  And of course, in order to keep up my supply, I had to pump every time a bottle was offered.

Our first real breastfeeding struggle came when I went back to work.  Thatbaby was going through 5 bottles at daycare, at home he was only eating twice during the same time period, and at work I was only pumping enough for 2 bottles.  I spoke with his daycare and convinced them that he probably didn't need as much milk.  Because it comes out of a bottle so quickly, many breastfed babies don't realize they're full until a few minutes after they finish.  So they fuss a bit when they finish the bottle, and this becomes another supply issue.  Because more milk is offered and it stretches out the baby's stomach.  Then they need more milk, and your body can't keep up.  Daycare slowed the bottle feeding and waited a little after feeding him, and sure enough, he dropped down to 4 bottles.

Which was still more than I was making.  But I wanted to keep going, so I added in some more pumping sessions.  On the weekends, I added in 2 sessions each day.  And I added in an extra morning session each day of the week.  It was a lot of time and effort, but it meant I was able to keep giving him breastmilk and build a freezer supply for days when I couldn't make enough, and that I'll be able to use over the next month while I stop pumping.

My favorite breastfeeding tools:
*My Glider.  I know, I wrote all about this when I talked about the nursery, but for real, this is the #1 breastfeeding tool.  Because you spend so much time, it's important to be comfortable.  And I'm totally spoiled.  I hate nursing in bed or on the couch, or anywhere without backsupport where I can't put my feet up. 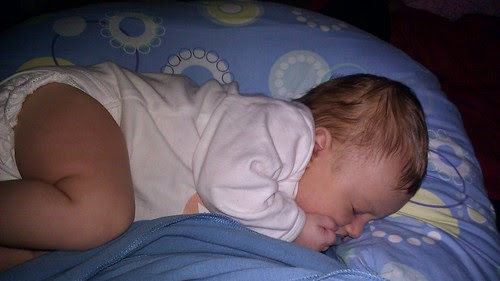 *A Boppy.  I still use this, although it was much more important in the beginning when Thatbaby was a little guy, because it supports him, close to the breast, so I didn't have to hold him there. 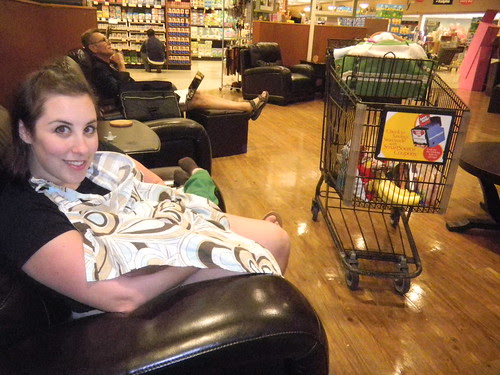 *Bebe Au Lait Nursing Cover.  I started this entry by talking about my love/hate relationship with me breasts.  I've never been entirely comfortable with them, and I certainly don't love people staring at them.  So for me, a cover was a necessity, because there was no way I was going to let my own insecurities keep my baby from eating.  So this is a "have cover will travel" situation.  I could (and do) nurse anywhere, just throw this around my neck.  I have a couple nursing covers and this one is my favorite because of the boning that lets me look down and see Thatbaby.   It's also great for distraction free nursing and to shelter him from the elements while he eats (sun, wind, etc.)

*Simple Lines Breast Milk Trays.  I personally think this is the most fantastic storage system.  I freeze my milk in one ounce sticks, then place them in Lasinoh bags.  Then I can take exactly as many ounces as I need, place them directly in the bottle, and let them defrost there.  A lot of people use regular ice cube trays, but the shape of the ice cubes make it more difficult to put in the bottle, so I'm a stick girl.

*Bamboobies Breastpads.  I know I'm not the only one who leaked.  And big wet patches on your chest is never attractive.  I love these reuseable pads.  I have the daytime and the nighttime version.  The daytime ones are super duper soft.  But they're also super duper thin, so you don't end up with unsightly bulges you can see through your shirt.  The night time ones are super thick - so you can see them through your shirt, but if you're wearing them in bed, who cares?  And they're fabulous for when your baby starts sleeping longer so you don't wake up in a pool of milk.


I love these pads so much that I'm going to give one of you a free set!  Just leave a comment between now and next Monday and I'll pick a random winner.
Posted by That Girl at 10:55 PM