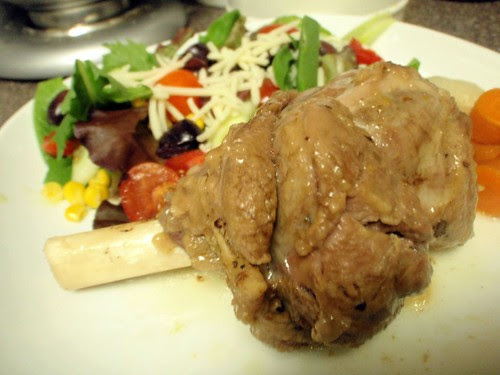 Passover is just a few weeks away. I don't normally plan in advance, but this year I am. There are two reasons for this. The first is that when I went shopping this week, the people in front of me had an entire cart full of their Passover shopping. And that was last week! Am I already behind? Last week was the first week my store had the Passover section open - 5 rows of Passover food. The second reason is Cara's Seder Plate Challenge.

Cara's challenge is based upon the traditional Passover Seder Plate - the ritual centerpiece of the ritual meal for Passover.

Let's start with the egg and work our way around, since all of you are familiar with an egg.

Egg - this is a symbol that pretty much everyone recognizes. It's the idea of rebirth. The circular shape represents the cyclical nature of life. (You know "The Circle of Life") I have yet to have one person explain to me the relationship between the Easter Bunny and eggs, since rabbits are mammals and therefore don't lay eggs. I have a theory this is one of the "borrows" from another religion the Catholic church is over so found of. (Oh HI Christmas tree!)

Okay, go in either direction from the gg and you'll find:

Green Vegetable - I can't explain why, but every single seder plate I've seen has an extra "spot" on it, this one fills the spot with a green veggie, but you can just as easily put a cup of tea in the extra space. Anyway, back to the green veggie. This is another symbol of newness - regrowth, hope, and all that good junk. But just in case you get a little too hopeful, the green veggie is parsley 99% of the time. Not exactly tasty. And in case parsley is your thing, we also dip it in salt water, to remember the tears of our ancestors.

Lamb Shank - This is representative of the Passover offering, or ritual sacrifice. I grew up in a very small town (hi Rene!) and they were not really familiar with Jewish traditions. I remember every year having to convince my friends that the Jews do not eat Christian babies at Passover. Somehow the idea of the 10th plague (the killing of the firstborn Egyptians while "Passing Over" the homes of the Jews) has been twisted and translated into something very...weird. Frankly, I'm tempted to say that the eating of Christian babies goes against a number of Jewish tenets such as "thou shalt not murder" and the whole idea of "kosher."

Charoset - Somehow Jewish holidays always involve apples. Interesting since apples are definitely not spring fruit. These apples are mixed with red wine, nuts, honey, and spices. In the Passover story the Jews were slaves in Egypt and had to do slave things like build pyramids. So next time someone tells you about the aliens or Mayans being in charge of the pyramids, you tell them that my people broke their backs making those suckers. Anyway, long story short, the charoset represents the mortar between those bricks.

Bitter Herb - horseradish! Because man y'all, that slavery time? So not fun. And in case you forgot about how much is sucked, a bite of this will remind you. Yeah, we're still bitter. Ask anyone whose people have been enslaved. We hold grudges.

Anyway, Cara has started a challenge in which we use one of the items from the seder plate to create a Passover friendly dish. I'm expecting loads of really creative dishes. Especially considering Cara has always been my inspiration for Passover meals. She introduced me to quinoa which has been a Passover staple in Thathouse ever since.

This is not one of those creative recipes. BUT it is a fabulous way to get a lamb shank for your seder plate. (Although, my supermarket gives them out for free - they literally stick a basket in the meat section and you can just grab them - but maybe you don't live in such an awesome place.)

First you braise the lamb shanks.
Then you eat the lamb.
Then you throw them back in the oven to roast off any remaining meats on the bone.

Oh you want more of a recipe? Try this: 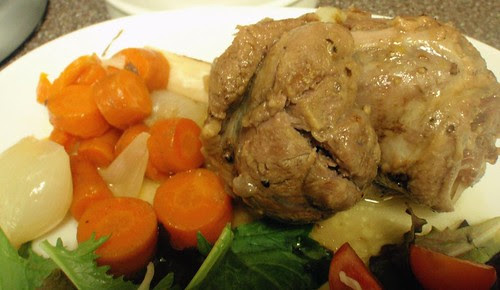