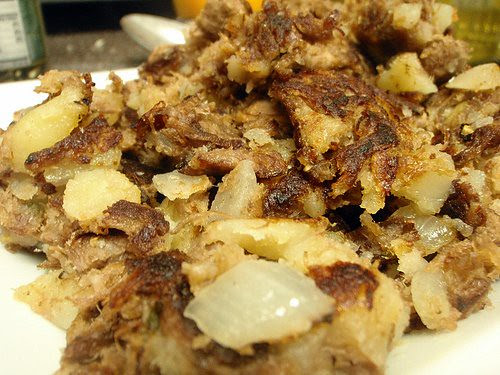 Thatboy and I are commuter buddies every now and again. We work across the street from each other, and aside from the fact we have different hours, it works out for the most part. A couple of weeks ago I was the cause for the commute as my car was getting some work done. Today, Thatboy brought his moneypit of a car in.

You have to understand, Thatboy LOVES this car. It was his first purchase when he got his first out of school grown up job. And he has since sunk a ridiculous amount of money in it. It's almost as if he is rebuilding it, one piece at a time. Last weekend, the driver side door stopped working. It no longer opens from the outside. So he made plans to drop it off at his mechanic (otherwise known as the Highway Robber) to get the door fixed.

Which means we were carpooling to work this morning and leaving at an insanely early hour so we could drop his car off and still get him to work on time. Too early for me to get in my morning run. And when the alarm went off, I was not ready to get up. I felt like I had taken Benadryl last night and it hadn't fully worn off. It was so bad, that I was afraid I was going to fall asleep in the shower, so instead of blowdrying my hair, I crawled back into bed for a couple extra minutes while Thatboy took his own shower. Except, he didn't bother to cancel his usual morning alarm, and I was too lazy to turn it off, so mostly I just laid there and listened to his alarm for 10 minutes.

Needless to say, I was exhausted all day. Thatboy blames it on the fact that I didn't get my morning run in, since that gets me up and at 'em in the morning.

When we got home, I was supposed to hit the gym with Thatboy - our usual pattern when we're both home at the same time. Which really only happens when we carpool. Otherwise he hits the gym and I hit a pilates video at home. Tonight, he hit the gym, and I hit the bed to grab those extra few minutes I missed out on this morning.

Dinner was obviously a bit late and being that it's Friday night, I wanted something with little effort. So a reinvention of leftovers it was! Hash is a typical way to use up leftover corned beef (although I will never turn down a nice corn beef sandwich). It really works for all meat though. And although this roast beef hash was used for dinner, it would be fantastic for breakfast with a nice poached egg atop. 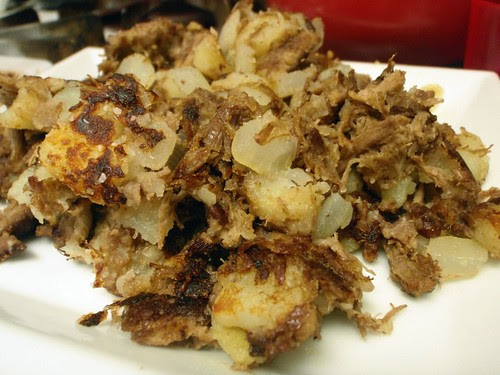