Now that the mid-season shows have started, Thatboy and I have been staying up later than normal, and later than we probably should. We normally are 10:00 bedtimers. I know, we're old. I've always been old, but Thatboy only became old once he met me.

Thatboy instituted a rule that he doesn't eat after 9PM, but he usually forgets. FF's snack mixes are perfect for these late night snackings because they're easy to eat without paying attention, and they're not terribly unhealthy.

When I first started drying the orange peel, Thatboy pretty much declared that this one was going to be all mine. He didn't want any part in the potpourri. But as usually happens with Thatboy's premature declarations, once he tried some, he was hooked. His hand kept reaching the bowl over and over and over again. He even fished out the pieces of oranges to eat on their own.

The thing I'm loving about this cookbook cook-through is that I'm really getting to know all the specialty shops in my area. There's a natural food store right next to our fancy schmancy grocery store and I've never been in it, because...well...there was really no need. But this recipe's called for mixed seeds, of which even the fancy schmancy grocery store has not. And I was tempted to steal some from the neighbor's birdhouse, but goodness those things are so high off the ground! So instead I went to the natural grocery store and picked up sunflower and pumpkin seeds. And sweet tea. And some fresh fruit. I think I may be back very soon! 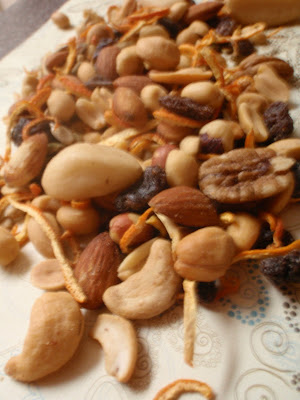 Raisin Nut Mix (From The Fannie Farmer Cookbook)
Posted by That Girl at 7:09 PM