Providence (noun): provident or prudent management of resources; prudence.
example: buying an 11 lb turkey to feed 4 people and putting half the turkey in the freezer.

While that example may not seem like providence, when I found myself staring at a recipe for turkey broth, I couldn't help but be thankful for my forethought. I mean, how often do you have half a turkey (with bones) in your freezer? And the thought of roasting another whole turkey, while delicious, seemed a little much to make soup.

However, after tasting this turkey soup I am forever saving each and every bone from every turkey I make and will probably be making turkey more often than a sane person should. This was unbelievably phenomenal.

I had begun to make it on a Saturday morning, but a mid-afternoon decision to hit up the movie theater had be quickly straining and refrigerating. I came home to turkey jelly. A couple scoops and some reheating later, Thatboy and I were eating the best broth either of us had ever tasted. So much more flavorful than chicken broth! Thatboy doctored his up by adding the veggies and some of the turkey meat from the soup itself, but I took mine in the fantastic unadulterated form. 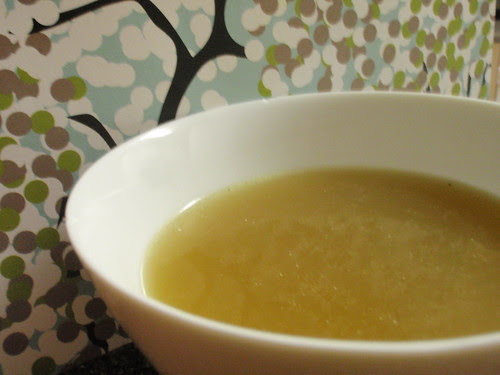 Turkey Soup (From The Fannie Farmer Cookbook)
Posted by That Girl at 7:34 PM