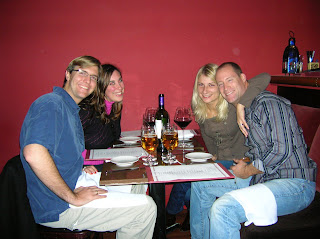 No, not me. Although I have my days. The title of this post is in reference to Jon. He is the oh so lucky one. I mean obviously, he's lucky because he has me. The more time I spend with his family the luckier I realize he is. But other then me, Jon is lucky to have some very good friends. We spent the day with two of those friends yesterday - M and her husband B. Jon and M have been friends since high school. M still lives in the same area where they grew up, and whenever we visit Jon's family she makes sure to plan a day away from Jon's family for me. "Kate's break day" included a trip to Redwood Park with Ringo and M&B's dog Sonnybear. The dogs hit it off immediately and the 3 hour hike didn't feel nearly that long! After our day in the woods it was time for a night in the city.

M&B took us to Potrero Hill, a San Francisco neighborhood which seemed a world away from the hustle and bustle of downtown. We began the night at Lingba Lounge. 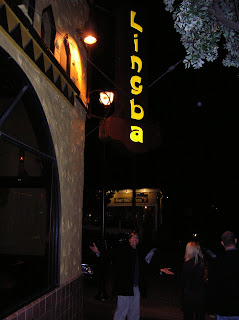 Lingba Lounge is dark and hip with crazy chandeliers and monkeys everywhere. Even on the drinks! 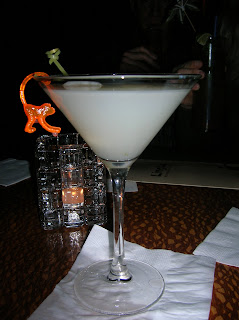 I was definitely tempted by the "monkey bowl" which came with a polaroid picture of you and said drink. Instead I stuck to the "safer" choices of lychee martinis and guava cosmos. Jon stuck with Lingba Lemonades which were a combination of bourbon and lemongrass syrup. The drinks were pretty and potent, which is the way I like my drinks. 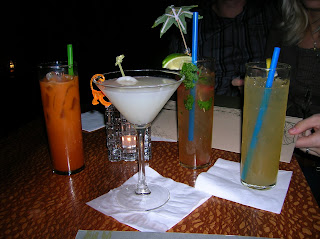 After drinks we headed over to our dinner reservations at Baraka. M ensured we ate "downstairs" which is apparently the cool place to eat at Baraka. We were the only people in the downstairs area and our waiter was a lot of fun. 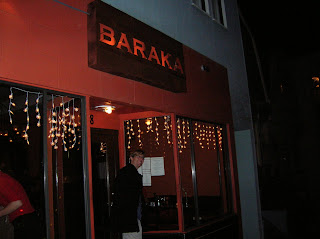 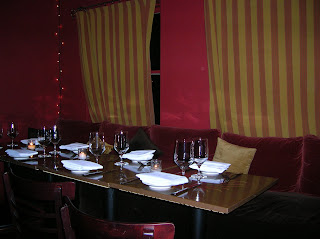 M was overjoyed at having a partner to split a bottle of Malbec with her, and I was only too pleased to oblige. We let M&B do the ordering, and I'm so glad we did because they food was beyond words! 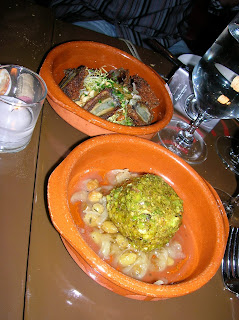 We started out with the house special goat cheese and prosciutto wrapped dates. We loved the goat cheese, but my favorite was the dates. They were stuffed in cheese and tasted like little pieces of heaven - sweet, salty, and gooey. 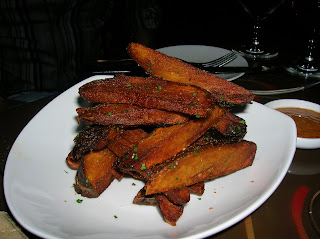 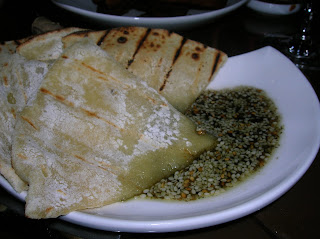 When we ordered our meals and sides, our waiter recommended we get the sides first to snack on while we waited. So we had spanish fries and flat bread. While M raved about the fries being the bes thing she'd ever eaten, Jon declared the flatbread other worldly. Fingers were dipped in the sauces when the bread disappeared within moments. 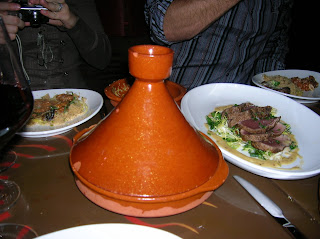 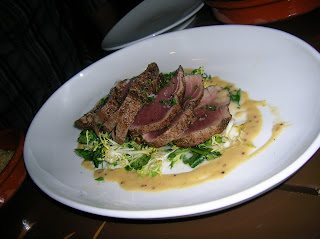 For dinner we split three meals between the four of us. With all the other food this was a very wise decision. We had 2 orders of the lamb tagine with succulent, tender, flavorful pieces of meat. They also ordered seared ahi, which I can't speak on since I don't eat fish, but everyone else really enjoyed it!

We also ordered dessert, a trio of sorbet - grapefruit, green apple, and blood orange, and chocolate banana bread pudding. Of course, by this time the bottle of wine was empty and my camera was long forgotten, so please be content with me telling you the desserts were just as good as the dinner.

Seriously, I am so thankful for Jon's friends. I guess that makes me oh so lucky too!
Posted by That Girl at 3:03 PM