A little whisky never hurt no one 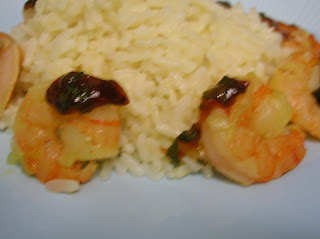 Mmmmmm I love double negatives! I love them almost as much as I love shrimp. I love them almost as much as DH loves his scotch. And DH loves his scotch. I almost was afraid to ask him if I could "borrow" some to make barbeque sauce. (Borrow is in quotes because it would be returned to him, but in a different form......) Luckily, DH agreed. And he was really pleased with the outcome. It was so simple, but every bite was met with a sigh or murmer of approval. It just goes to show. You really can't go wrong with simple shrimp. And if you get your eater drunk enough, anything tastes good. 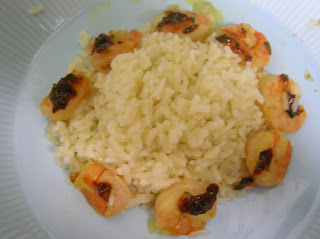 1) In a small saucepan, heat whiskey to boil. Reduce about 6 minutes.
2) Stir in ketchup, brown sugar, cilantro and keep warm.
3) In skillet, heat oil over medium-high heat. Add garlic and shallot and cook one minute.
4) Add shrimp. Cook 4 minutes or until pink. Drizzle hot glaze over shrimp.
Posted by That Girl at 8:33 PM