Last weekend I ran a very different kind of virtual race, Run the Solar System Virtual 10k.  Maybe not totally different if you're used to the app or virtual races related to ZombiesRun! Which is how I heard about this race in the first place, as Six to Start produced the app used to run the race.

This virtual race was put on my British Science Association in conjunction with British Science Week.   It was free to enter, although you could pay extra for a "medal pack."  And prior to the race, they provided a 5k training run through their app.

It gave you the opportunity to "Run the Solar System"  or a scaled down version of it anyway.  All the planets, smooshed into 10 kilometers.    In terms of what that entails, it means you download an app and start it before you run the race.  Every 500 -1,500 meters during the run, you hit something in our planetary system.   Which is a very interesting way to run.

The problem with most virtual races is that they lack the entertainment of an actual race.  You're out there, doing your own thing, on your own.  In my case, this was happening on a very dark and foggy early morning.  So there wasn't even anything interesting to look at.

Which means I was especially appreciative of having a little voice in my ear, cheering me on, telling me how far I'd run, and most importantly, telling me allllll about the planets I was passing.  I'm such a science nerd you guys.  I love this stuff.  And it was fascinating to hear the facts and tidbits about the planets.  There were even clips from the first flight to the moon, and the landing of the mars rover!

As the race ended, the sun started to come up, though the fog stayed, and it definitely added to the mood.  When you finish the virtual race, your time is added to the leaderboard, with runners from around the world. 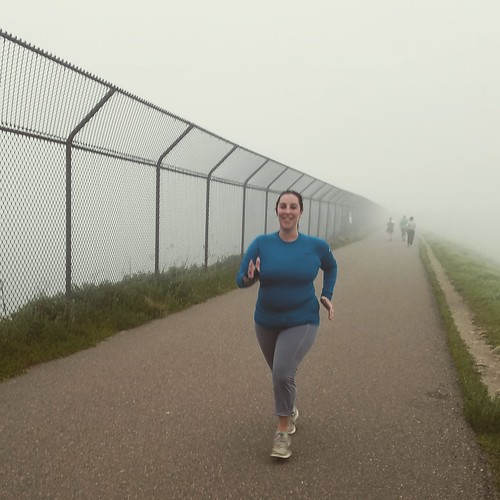 I really enjoyed this race and would recommend it to anyone.  I hope this is the future of virtual races because it was so much more interesting than most.  And unlike the ZombiesRun  race, which I would NOT recommend doing in the dark, this one was perfect for an early morning run, still under the moon!
Posted by That Girl at 1:00 AM