Thatboy and I are nonpartisan alcoholics. We enjoy wine, liquor, and beer. But living in San Diego has made us definite snobs when it comes to beer. We can't help it, we're lucky enough to have amazing breweries in the area that are consistently recognized in both national and international competitions.

So when I noticed that San Diego hosts an international beer festival each year at the county fair, I thought it would be a fun thing to attend. Prez was in too, and brought her older younger sister (I'll give you a second to work that one out). 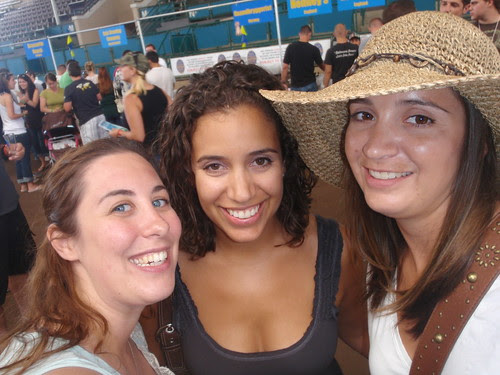 The International Beer Competition is an all you can drink free for all. You get a souvenir glass which you bring to each represented brewery and they fill it up with a 1 ounce tasting. Again, and again, and again.

There were 156 breweries represented, and most had multiple beers to sample. Many many breweries + many many beers + unlimited samples = good times for everyone. 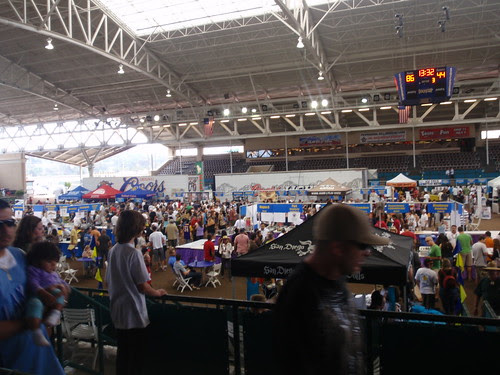 Thatboy's goal was to sample each and every beer at the festival. Prez, Old Young Sis, and I decided we'd rather focus on beers and breweries that interested us. 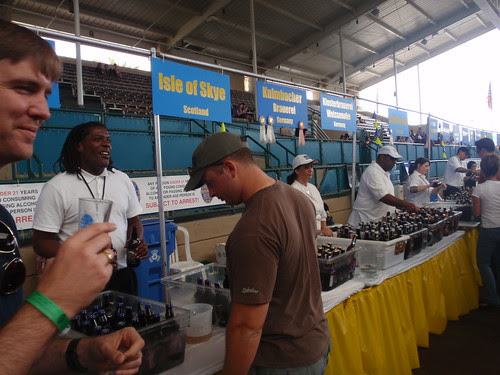 Lost Abbey is my FAVORITE local brewery. FAVORITE. Every beer I've had from here is a hands down winner, but my favorite is the Red Barn. I order it everytime we see it on a menu. I dragged Prez and Old Young Sis over to try it and they agreed it was magnificent. 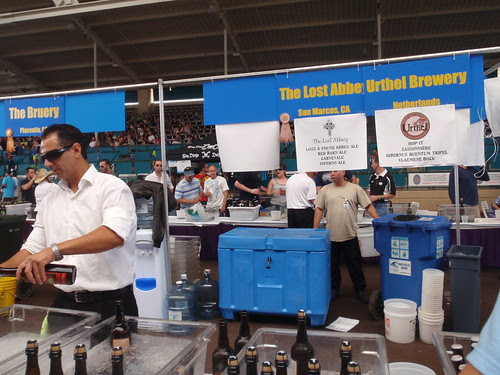 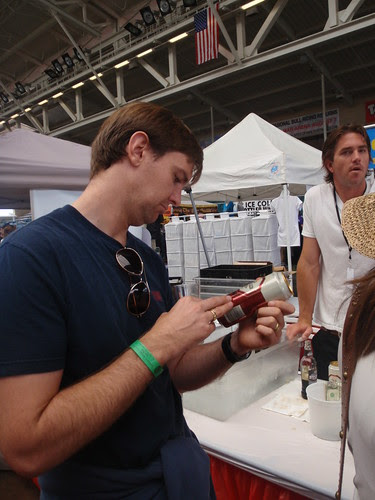 Pietra, a french ale, won me over with its super smoothness and sweetness. That little gold ribbon means I wasn't the only one impressed. 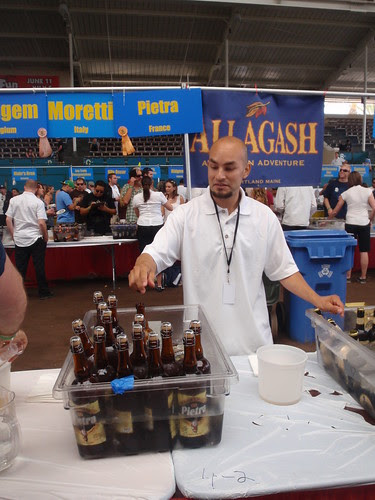 Thatboy's plan to drink at every station meant the girls separated from him, and then we lost him. Eventually I texted him to see where he was and got some sort of incoherent reply that he was too drunk to continue, could I please come get him at the roller derby. 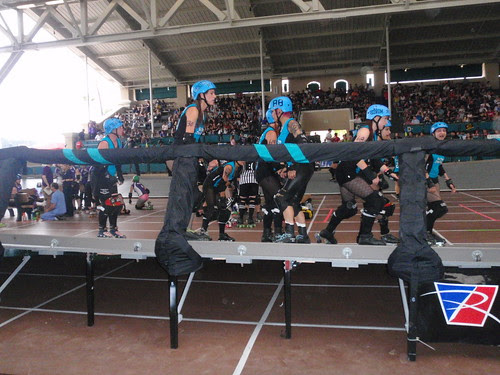 Yup, cause nothing goes with beer like some girl on girl bashing. We hung out watching our San Diego Dolls until Thatboy sobered up enough to continue. 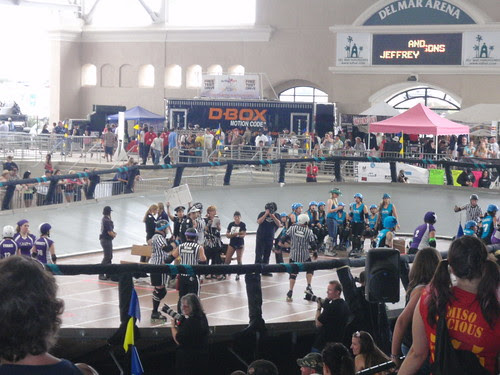 During round 2, Thatboy decided to ask if maybe they could please give him less than a 1 ounce taste. 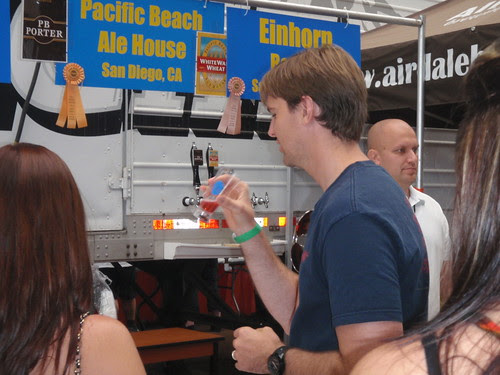 And it wasn't too long before he decided he would have to call it quits for the day. 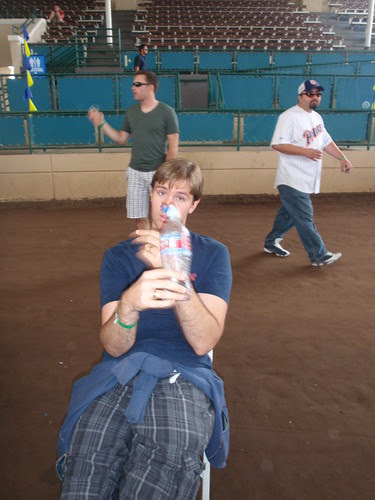 I decided it was time to move out of the beer arena and into the fair itself. Thatboy needed some air. I was really excited about the fair this year, since the theme was "Taste the Fun" - all dedicated to food! 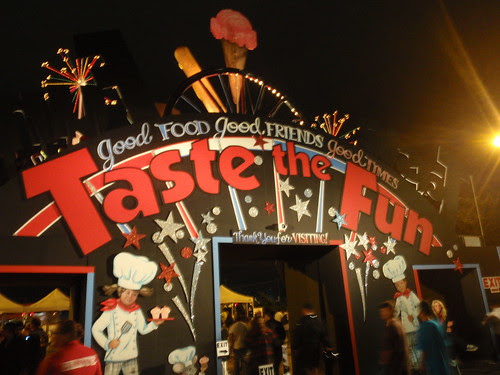 There were stands sponsored by food companies where you got free demos and tastes. 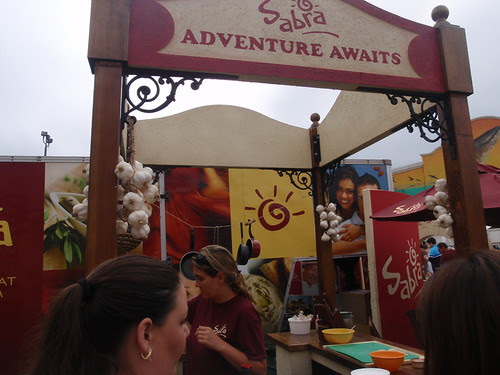 While I waited patiently in line for my hummus ravioli, Thatboy sat in drunken stupor, unaware he was in the middle of a battlefield. 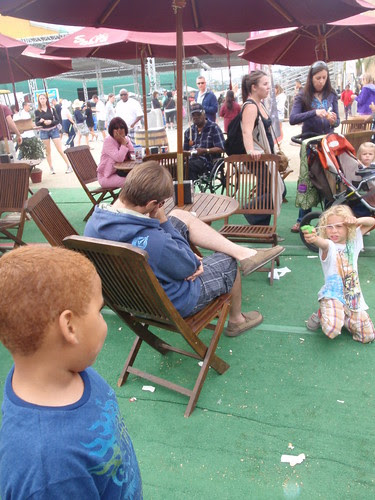 "Hmmmm," I thought. "Maybe we ought to get some food in that drunk husband of mine." Especially since we hadn't eaten anything that day but a handful of cheez-its.

Thatboy and I plan out our fair meals way in advance, researching what's new and what we plan on risking heart attacks for. This year, however, we were more focused on the beer and dessert and hadn't put much thought into dinner. Until Prez and I saw a girl with a sweet potato dog at the beer festival. A spicy sausage, dipped in batter, and then sweet potatoes and then fried. OMG spicy sweet deliciousness. 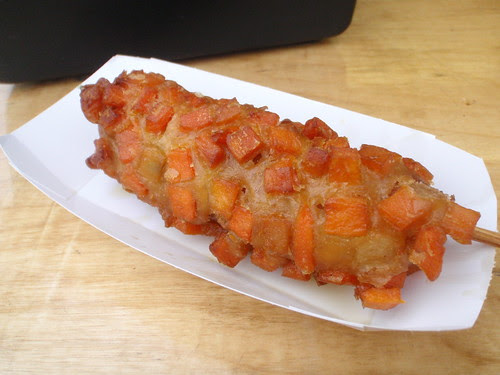 Thatboy went with my second choice - the buffalo chicken fry bread. I didn't really want to get this since I had fry bread last year at the fair and decided it was a little much to keep on having funnel cake for dinner and dessert. But of course I supported Thatboy getting it since it meant I got a taste! 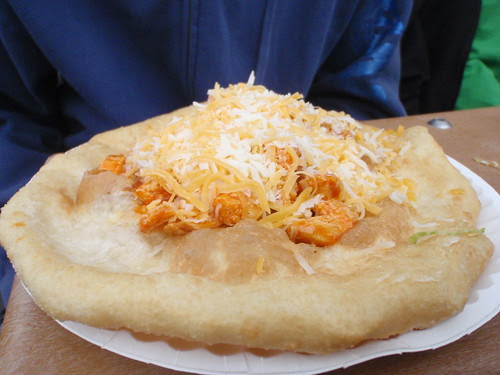 Thatboy was feeling MUCH better after he got some food in his stomach, so we could explore the rest of the fair. Like this crazy butter sculpture. 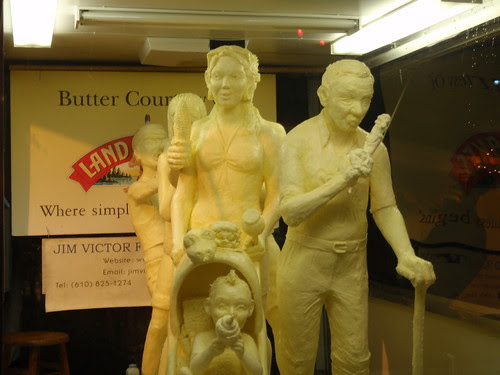 And giant cows. I think this guy weight like 1200 lbs or something. 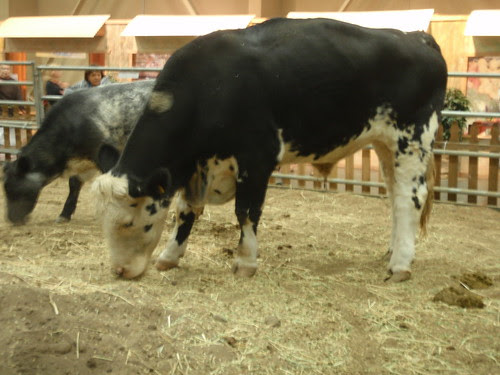 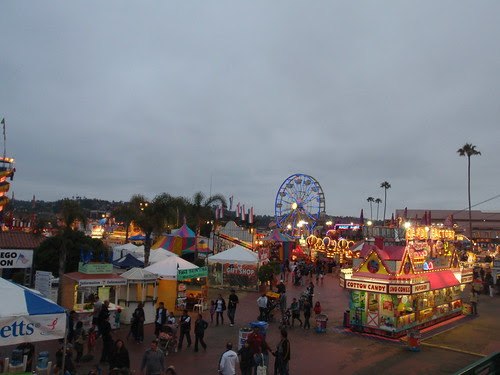 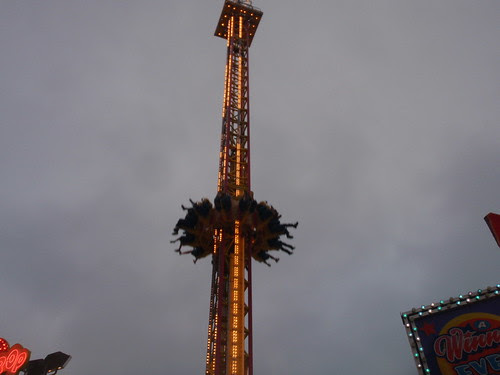 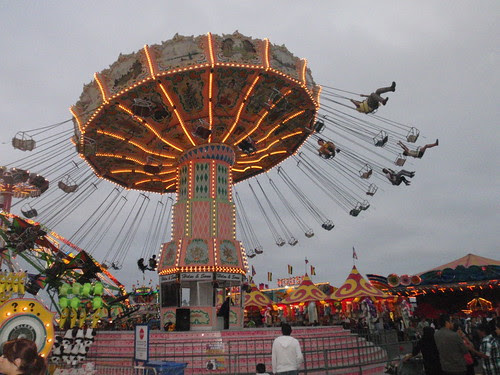 The "ride the elephant" ride always reminds me of "Divine Secrets of the Ya Ya Sisterhood." Everytime. It should remind me of my childhood. According to my parents, I used to cry at the costume characters at Chuck-E-Cheese, but wasn't afraid of riding elephants at all. 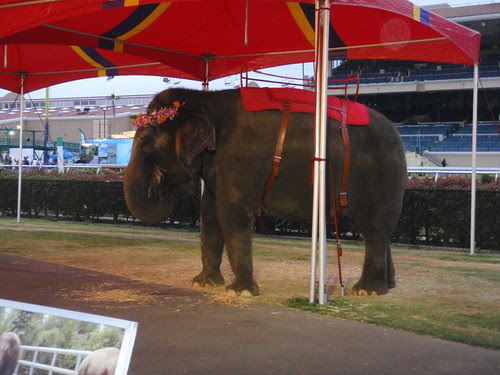 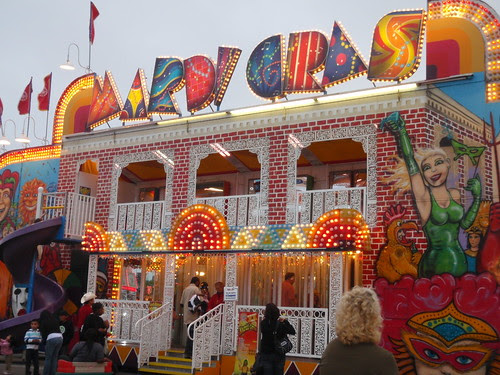 My favorite part of the ride section though was this ride. The "bible story" ride. I'm not kidding, it consisted of 2 women sitting inside on folding chairs. They were just waiting to tell you stories. Oooohhhh Scarrrrrry - gave me the creeps. 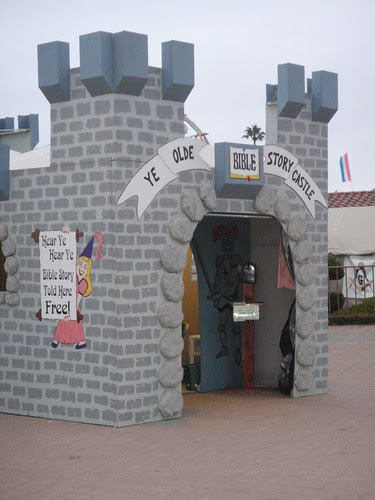 All that walking around made us hungry again, so we headed to find dessert. Now, Thatboy and I are aware that fair food isn't exactly healthy, but even we steered clear of a place that called itself the "heart attack cafe." And as much as I love butter, fried butter is not high on my list. 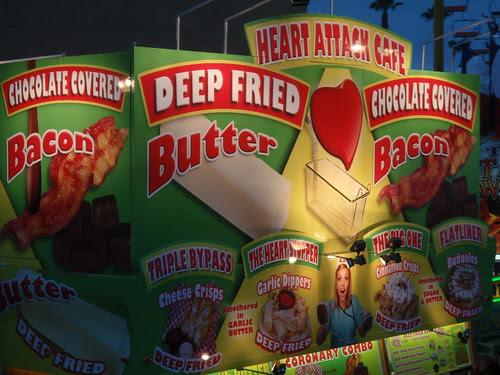 Thatboy loves to try the latest fried concoction though, and this year it was the fried klondike bar. Mmmmmmm fried ice cream is always a winner. Warm AND cold! 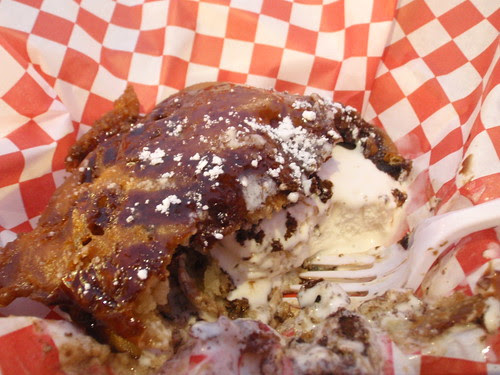 As for me, we were on a mad hunt to find the fabled "funnel cake on a stick" I had read about. It took a while, and we had almost given up when we stumbled upon it. And it was perfect Thatgirl size! I love funnel cake, but can never finish a whole one! This was just the right amount of fried dough covered in powdered sugar. And we all know everything is better on a stick! 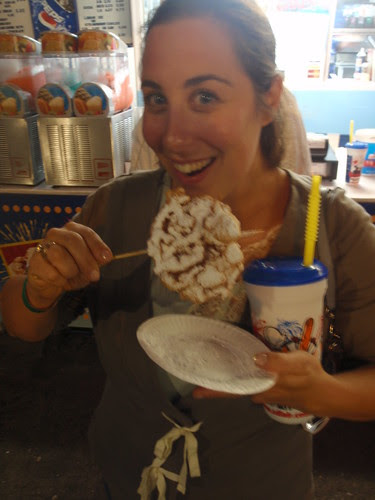 It's a shame the fair is only here once a year!
Posted by That Girl at 8:34 PM