That will do for sometime 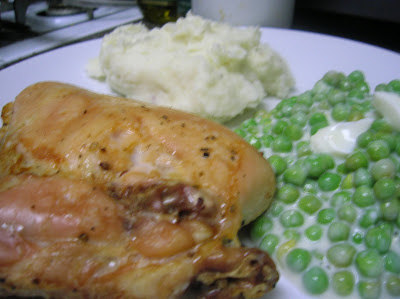 As I was making dinner tonight, it struck me that although I have posted mashed potatoes on this blog before, I've never actually posted a recipe. The only reason I feel like this is important is because up until about two years ago, I honestly thought mashed potatoes were made by adding milk to potato flakes.

Okay. Maybe that's not true. I'm sure I knew they could be made from real potatoes, but we didn't really have mashed potatoes growing up. We were more baked potato kind of people. Or roasted potatoes - which we called "french fries."

This entry is was also inspired by something else I learned how to make in the past few years diet soda cake. Have you made one of these yet? Basically you sub diet soda for any oil/water in a boxed cake mix and you end up with a moister, more figure friendly cake. But the magical properties of diet soda don't end there. It's also fantastic as a marinade! And it's one of the only ways Thatboy will let me use diet soda. He has a hatred for the stuff. And in general, it's not a problem, because we don't have soda in the house on a regular basis, and artificial sweeteners have been on my "avoid" list for years now. But we always have some left over from parties, and this is a great way to use it up.

And speaking of getting Thatboy to ingest something he doesn't love... tonight I learned a very important lession. Adding sour cream to peas is not a great way to get Thatboy to eat his veggies. He was not a fan. Although he loved the addition of hardboiled egg, he said he would prefer them without the addition of sour cream. I wrote that down in my extra creepy "everything Thatboy likes" diary so I'll remember in the future. I really have difficulty explaining the black eyes. There's only so many times you can "run into a door." 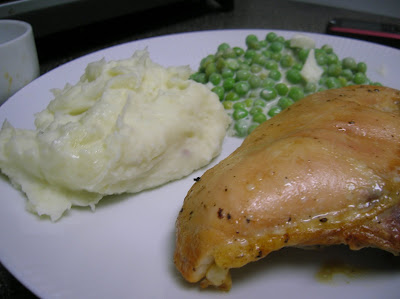 Basic Mashed Potatoes
3 redskin potatoes
1/4 cup milk
2 Tbsp butter
Peel potatoes and cut into quarters. Place potatoes in a large saucepan and cover with water. Cover and cook over medium heat for 20 minutes, or until potatoes are tender.
Place potatoes in kitchen aid with milk and 1 Tbsp butter and beat until desired consistency is reached.
Add 1 Tbsp butter, and season with salt and pepper.
Serves 2.
Each serving has: