A Day Late and A Dollar Short

So technically the Recipe Exchange recipes were due yesterday, but the ever understanding Amy gave me an extension. Meanwhile I HATE letting people down, and I know that whoever sent in the recipe I was supposed to make is probably tapping their toes anxiously waiting for the results. I feel really bad about that so I summoned up some fortitude and accomplished the feat today. Only a day late! That being said, I'm going to take a little hiatus from the kitchen while things hopefully work themselves out. I'll be back soon, I promise.

I have a sneaking suspicion that Grandma Williams, the creator of this recipe is very similar to my great grandmother. Only because this recipe did not come out nearly as well as anticipated AND I followed the directions exactly. Or nearly exactly. Which is another reason why I'm going to take a break from the kitchen because I think the meds are affecting my mad skillz.

I'll walk you through it. My remarks are in red.....just in case you can't tell.

1/2 tbsp instant minced garlic (or the real stuff) See above.

Fry tomato paste in oil until it can be formed into a ball. I'm sorry. Until it forms a what? Mine never balled up. Basically I fried it until it was shiny. Add tomato sauce, water and other ingredients.

Mix, bring to a boil. Turn to low & simmer 4-5 hours (the longer it cooks, the better it tastes! And it freezes very well) This is where "War of the Kitchen" began. When this baby boils it REALLY boils. Bubbles of tomato sauce ALL over the kitchen. It made me want to cry. But I didn't. Instead I kept playing with the heat until there was BARELY a flame below it. And STILL it kept sending Tomato volcanoes all over the place. I yelled to Thatboy "That's it. I'm going to put a cover on this thing before someone gets hurt." And that's when the tomato sauce heard me. It heard me and it sent a missile STRAIGHT for me. I have a beautiful red thumb to show for it. And I'm quite certain the new neighbors expect to find my body in a dumpster after the screaming that went on. I had to stop cooking the sauce after 3 hours because by this time it had almost solidified. There was very little liquid left and it was much more similar to tomato paste than tomato sauce.

1 lb. ground beef I used the ground veal I had in the freezer.

Combine all ingredients except oil. Mix well. With wet hands shape into 16 balls. Brown in hot oil slowly, shaking pan often. I SWEAR I did this. But I don't usually fry my meatballs, so this was a new test for me. Instead of meatballs I ended up with meat patties. When I put them in the pan they just flattened.

Drain. Add to spaghetti sauce last 1-2 hours of cooking. Yeah...those meat patties? Completely disintegrated when I put them in the sauce. I'm very go with the flow, so I shrugged it off (or as best as I'm able to shrug) and figured "Whatever - MEAT SAUCE!"

Make a mountain of flour on your work surface, then create a crater in the center. Add your eggs in the crater. Use a fork and beat the eggs in the crater incorporating a little bit of the flour at a time. Once the egg mixture begins to look like a batter, you can start incorporating more of the flour into the dough. After mixing all the flour, you will end up with a dough. If the dough is still sticky, add some more flour. Knead by pushing with the heel of your palm, fold the dough in half, give it a half turn, and repeat the process for 8 minutes or until it feels smooth. Marcella did not specify to let the dough rest but I let the dough rest, covered in a bowl (dish towels work great for this), for 15-20 minutes.

Cut the dough into 3 equal portions. Take one portion of the dough and press it flat, then run it through the pasta machine on the widest setting. Fold the dough in thirds and run the narrow end into the machine again. Repeat twice more. Do this to the remaining 2 portions of dough. Now you should have 3 portions of dough that have been passed through the widest setting 3 times each. Go up one setting, and run each portion of dough through twice, but do not fold in thirds this time, just run it straight through twice. Repeat with the two other pieces of dough. Go up one setting, and repeat again. After running the pasta through the #3 setting twice more, run it through the spaghetti cutter (the middle cutter between fettuccine and angel hair). Separate any noodles that did not get cut all the way through. Lightly toss the noodles in some flour.

So I was REALLY excited about this part. I was so excited I made Thatboy go out and get me a pasta machine. I've always wanted a pasta machine. I love homemade pasta. And things started out SO well! I had such high hopes. Even though it took much closer to 2 cups of flour than 1. And then the machine failed to cut the spaghetti - so I ended up with a beautiful crimped sheet of pasta. I painstakingly pulled each strand of spaghetti apart and put them in a bowl. I figured I'd toss all the noodles in flour at the end. BIG mistake. HUGE. By the time I had made all three sections my bowl was just one clump of spaghetti dough. There was nothing to do but try try again. I added a little flour and made a ball and tried again. This time the pasta cutter worked and I tossed each sheet immediately after cutting. I was feeling pretty good by this point.

Bring a pot of water to a boil, salt the water, then add the pasta. Cook for 1 1/2 - 2 minutes or until the pasta is al dente. Drain the pasta reserving some of the pasta water to thin out the sauce if necessary. 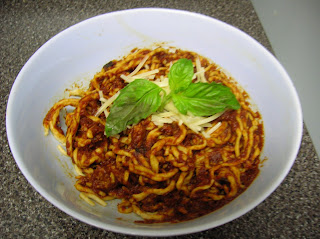 Yum!!!!! Thatboy loved it, and we have plenty of sauce for many pastas to come. I'm not sure whether I'm amazing, he's kind, or he's been dipping into my meds. Whatever the reason dinner was a hit. But I'd be willing to bet it wasn't nearly as good as Grandma Williams makes it.